Over the past day, I've published a few posts about Kambi's Wrestling Observer Newsletter star ratings betting markets for NXT TakeOver: New York and WrestleMania 35. In this final part, I'll take a look over two other kinds of markets that were available to customers leading into the event. They are head-to-head specials and prop bets.

In head-to-head - or matchbet - wagering, the customer is given two matches and they have the option to bet on which of the two receives the most stars in Dave Meltzer's review of the event. A third selection is also there to cover both matches possibly getting the same number of stars.

Kambi published three versions of these specials for WrestleMania.

Styles/Orton .vs. Reigns/McIntyre
When Kambi put AJ Styles .vs. Randy Orton up against the Roman Reigns .vs. Drew McIntyre match up, the company had the former as a 19/20 favourite. And, going by the wagering, the customers thought it was a rightful fave as it was cut into 10/11 by April 3rd and was then snipped to 4/5 on the night of the event.

The bettors were spot on. AJ Styles versus Randy Orton received three-and-a-quarter stars while its opposition was graded two.

Triple H/Batista .vs. McMahon/The Miz
When first published, the market which had the no holds barred match up against the one with falls count any rules had Triple H .vs. Batista open as an 11/25 favourite. The McMahon versus The Miz match was 11/5. The customers evidently sided with the falls count anywhere contest as it was the selection that fell the majority of the time that the market was available. By the end, the two markets were at 19/20 and the 'Same Star Rating' option, which started off at 41/20. was 9/4.

The result was a win for Triple H .vs. Batista. It was given two stars. Shane and The Miz failed to match it by a quarter.

You'll see, by clicking the table below, that the eventual winner began to drift out on March 26th and closed at 11/4. It was initially 5/4 on March 2nd.

Kambi also published a handful of Observer-themed prop bets for the PPV. Most offered a 'Yes' or 'No' option, but two specials only allowed  'Yes'. I'll get to those first and then go through the.. err.. proper prop bets.

Better Than TakeOver?
The bookies were offering 2/1 that the highest rated match on the WrestleMania 35 card would have more stars than anything that was graded in Meltzer's review of NXT TakeOver: New York. As I mentioned in one of yesterday's posts, Johnny Gargano's win over Adam Cole in the main event was given five-and-a-half stars. The highest rated match at Mania - Daniel Bryan .vs. Kofi Kingston - came a star short from tying let alone beating it.

Better Than ROH/NJPW G1 Supercard?
4/1 was being offered on the highest rated WrestleMania match beating the best match - or matches - on the Ring of Honor and New Japan show that took place from Madison Square Garden the night before. The only match that beat Kofi's title win was the main event, which saw Kazuchika Okada claim the IWGP Heavyweight Championship from Jay White. It received four-and-three-quarters.

There was another 'Better Than' special, but this did give customers the option to wager on the 'No', so I've included it in the prop bet coverage below the image of the prop market titles and how their odds were adjusted leading into the event. 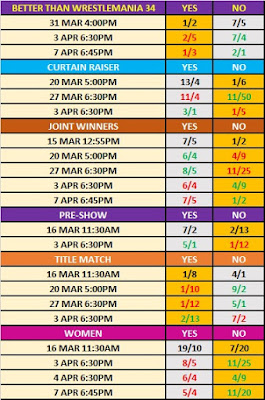 Better Than WrestleMania 34?
The proposition market titled 'Better Than WrestleMania 34?' was similar to the above two markets in that the customer had to bet whether one of the matches on the WrestleMania 35 card would perform better than any on another card. This time, however, the customers were wagering on the highest rated match at this year's WrestleMania doing better than the one from 2018. The customers were able to bet 'No' on this. It opened at 7/5 while the 'Yes' was 1/2.
The match that had to be beaten was Ronda Rousey and Kurt Angle .vs. Triple H and Stephanie McMahon, which was given four-and-a-quarter in Meltzer's review of WrestleMania 34. With Kofi Kingston's win over Daniel Bryan getting a quarter more than that, the winning selection was the favourite.
As you can see, the consensus agreed this year's highest rated match would beat last year's. The odds were moved to 1/3 from 2/5 on the night of the event.

Curtain Raiser
The market titled 'Curtain Raiser' allowed punters to bet whether or not the first match on the main card would turn out to be the highest rated match on the card. It turned out to be Brock Lesnar .vs. Seth Rollins which - in a way - had the potential to do well. The winning selection was obviously 'No'. It opened at 1/6 and was last seen by yours truly at 1/5 in the afternoon of April 6th. I surmise the reason why it was taken off the board is due to reports that AJ Styles versus Randy Orton - another match that had potential on paper to get the most stars - was scheduled to be the main card opener.

Joint-Winners
The prop titled 'Join-Winners' was an opportunity to wager on or against there being two or more matches with the highest amount of stars in Meltzer's review. With Bryan .vs. Kingston being the only match with the highest number of stars, the winning selection was once again the 'No'. It was 1/2 to start off with before falling to 11/25, but managed to drift back up to its earlier price by Sunday evening.
I had a bet on this market, but I went the wrong way. I backed 'Yes' when it was 7/5 on March 15th. I felt that, with a card filled with tons of matches, there was a strong chance that there would be a tie when it comes to matches with the highest star ratings.

Pre-Show
The 'Pre Show' proposition was for any of the matches on the pre-show to be given the highest star ratings in Dave Meltzer's review. Unsurprisingly, the bookies had the eventual winner - 'No' - a very short 2/13 when I came across the market on March 16th. It was down to 1/12 by April 3rd and remained that way right up until the close.

Title Match
The 'Title Match' prop was for any match 'valid for any championship' would be awarded the most stars in the review. With Bryan .vs. Kingston obviously being for the WWE Title, this was a win for those who may have backed 'Yes'. And, if you look at the table above, it looks like many did as the selection opened at 1/8 on March 16th, was backed into 1/10 by March 20th and fell into 1/12 a week after that. It closed at a mildly higher 2/13 after the 'No' was cut from 5/1 into 7/2 in early April.

Women
Finally, the market titled 'Women' was available for customers to bet a women's match receiving the most stars in Meltzer's review. With the main event and the battle royal only being eligible, it was safe to conclude that - for it to win in favour of 'Yes' - the main event had to be the match of the night.

This was the fourth Observer star ratings betting post within the past day or so. The other posts are:


Daniel Bryan .vs. Kofi Kingston Wins Match of the Night

I'll return to the Observer specials next month if Kambi releases anything for Money in the Bank 2019.