Following his win in the 50-Man battle royal at yesterday's WWE Super ShowDown pay-per-view, the William Hill oddsmakers have added Mansoor to a couple of its outright markets for two of 2020's big matches.

The 'First Saudi Arabian Superstar in WWE History' has been installed as a 100/1 outsider to win the 2020 WWE Royal Rumble in the market that has been available to punters since May 20th. 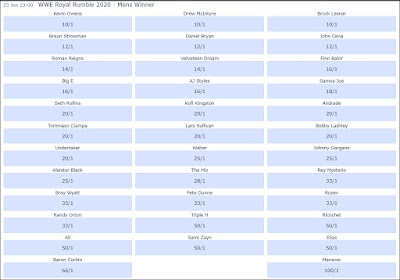 The second market last night's battle royal winner has been added to is the one for the 2020 Money in the Bank ladder match.

He is 125/1 here. When I saw him at that price, I thought to myself it was worth a small punt just in case WWE has him challenge for a title at a future  Saudi show.

This is a gamble as there are many reasons why this will not happen.

Here's one - the 2019 edition of Money in the Bank happened before Super ShowDown for one reason and it's because the Saudi Government forced WWE to change the original day (May 3rd) of the event. Had it taken place on its original date, the show would have been before Money in the Bank 2019.

The point I am trying to make is the 2020 spring/summer Saudi show could be earlier than Money in the Bank 2020, so there's a very slim chance of Mansoor winning the briefcase to set up a title match

But this really is putting the cart before the horse.

The full list of selections - along with their prices - can be viewed by clicking on the image below. 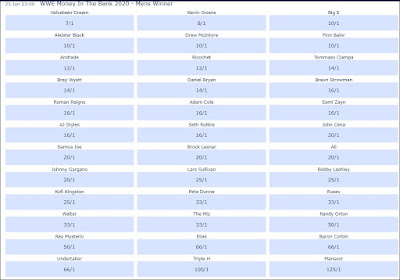 William Hill's WWE markets are found on its TV/Specials Page.
Posted by David Taylor at 15:03