The B Block side of this year's NJPW G1 Climax tournament is now underway.

Due to today's event starting off, Kambi has temporarily closed any markets featuring stars from the B Block, so I thought I'd publish an update pointing out the B Block and outright winner odds as they stood before they were removed.

I noticed that there were adjustments made when I looked through the markets yesterday morning.

The changes saw Tetsuya Naito become a sole favourite to win B Block after starting off sharing the role with Jay White. He moved from 6/4 to 11/10 while White's price rose to 9/5. 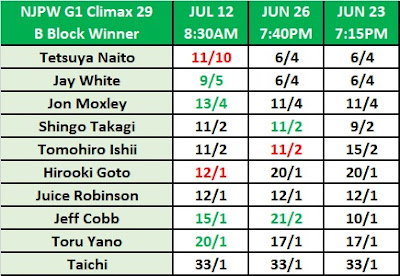 As you can see below, Hirooki Goto's price was cut from 20/1 to 12/1. That one could be on me. I thought I'd take a gamble on him winning the block like he did with A Block a few years ago. I thought the 20/1 was worth a small punt. 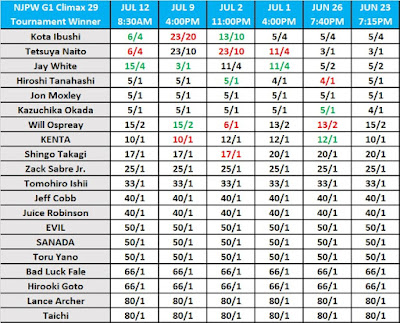