After temporarily closing betting while today's B Block matches of the G1 Climax was in-running, the oddsmakers have republished their markets for the tournament.

Here's a table with the current prices along with some notes about the price changes. 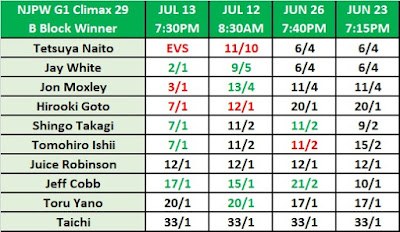 Tetsuya Naito, who lost to Toru Yano today and - as a result - is currently on zero points, is still a favourite to win the block. He has been cut from 11/10 into EVS.

The two other selections with shorter odds than this morning both won their first matches of the tournament.

The tournament resumes tomorrow with the A Block participants wrestling their second matches.

I'm interested to know whether the person - or persons - keen to see SANADA win the block are also the punter/s with Naito to be atop B Block when all is said and done. 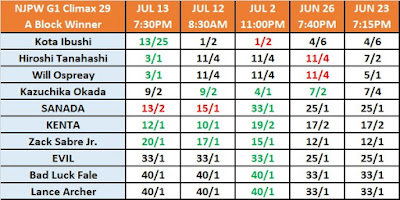