Styles' Odds To Be Next US Champ Shortened Following Heel Turn

After turning heel on Ricochet at the close of last night's episode of WWE Monday Night Raw, AJ Styles role as a betting favourite to succeed Ricochet as US Champion has shortened.

The Sky Bet website republished its 'US Champion After Ricochet' market this evening with Styles now at 5/4. He was previously at 3/1 after opening at 7/2 on June 25th. 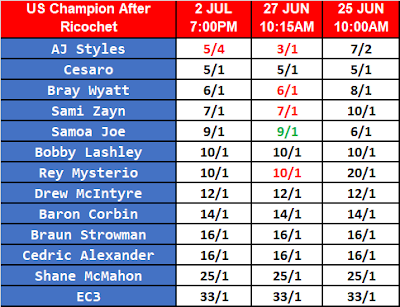 On one level, it's understandable to see Styles' price lowered because his turn was at the expense of the US Champion. He also holds one non-title win over the champ, but - on the other hand - lost last night's title match.

As I've written in other posts about this market, I believe that Ricochet should go on a long reign with the title.

On top of that, I have a feeling that a heel AJ Styles - with Gallows and Anderson as back up - could be the Seth Rollins' next challenge once the champ moves on from Baron Corbin.

I hope so, anyway.

I had backed Styles to succeed Rollins for the Universal Championship in a similar market from Sky Bet weeks ago, but placed another small bet on him at 20/1 this evening.
Posted by David Taylor at 20:03