Kota Ibushi is this year's G1 Climax winner after beating Jay White in the tournament final a few moments ago.

The wrestler was a betting favourite when Kambi's market for the tourney was first installed in June. Back then, he started off at odds of 5/4 to be crowned this year's winner.

5/4 was not the best price customers would have found him, however.

As the tournament was in progress - and Kazuchika Okada was dominating A Block - the oddsmakers moved Ibushi out to 3/1.

The market was last made available a couple of days ago with the eventual winner closing as a 4/5 fave.

You can view how I tracked Kambi's outright winner market in the table below.

The tournament winner market isn't the only G1 Climax special that will be settled following today's result.

A few days ago, Kambi released a special in which customers could place wagers on the person they felt would end up being the 'Losing Finalist'.

Jay White, who earned a place in today's final by winning B Block, will be the winning selection. He kicked off at 2/1 on Tuesday and was pushed to 13/5 by Friday. From there, his price was moved down.

Despite his odds lowering, he still closed as in third place behind Ibushi and Tetsuya Naito - the person he beat in the final match of B Block.

White's final price was 23/10. You can view how all the selections performed in the table below. 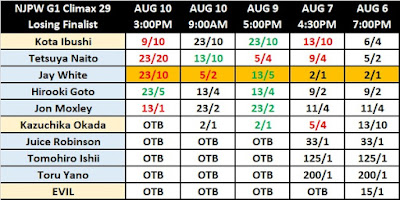 This isn't the last G1 Climax 29 post I'll publish. There will be more. However, I don't know what the ETA is.