As mentioned in the most recent post, this week's issue of the Wrestling Observer Newsletter was published this morning. It not only includes Dave Meltzer's reviews of the final batch of G1 Climax tournament events, but also the NXT TakeOver and WWE SummerSlam shows that took place over the weekend.

The oddsmakers from Kambi published a handful of Wrestling Observer star ratings for the aforementioned shows, so - in this post - I'll take a look over those that for the matches that took place at both NXT TakeOver: Toronto and WWE SummerSlam 2019.

The bookies had Over/Under star ratings lines for the five bouts that took place at TakeOver. Of the five, only one of them went 'Over' and it was for the Io Shirai versus Candice LeRae match.

Kambi had the line set at 2.75 stars, but Dave Meltzer gave it four-and-a-quarter, so it went over the line. And then some.

There was a mixed bunch of results for the WWE SummerSlam 2019 Over/Unders. As you'll see, there were Overs, Unders and even a trio of 'Exactly' wins. 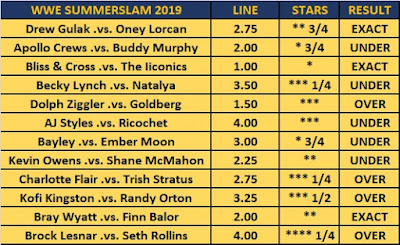 Brock Lesnar .vs. Seth Rollins match - for the WWE Universal Championship - was the highest rated match of the night. It received four-and-a-quarter stars and was a quarter of a star higher than the line. I had a feeling it would go under.

Another selection I slipped up on was for the Bray Wyatt versus Finn Balor match. I thought it had a slight chance of going over two stars, but it landed right on two.

The 'Highest Rated Match' market had the 'Universal Championship' selection as a 33/20 second-favourite throughout the weekend and will now be graded as a winner thanks to the performances from everyone involved in the Seth Rollins versus Brock Lesnar match. 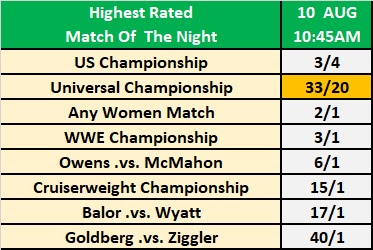 Another market that will be settled with odds of 33/20 is the one in which customers could have bet on the 'Exact Star Rating of the Highest Rated Match'. The  winning selection was the 'Exactly 4.25 Stars' selection was a joint-second favourite.from Saturday morning right up to Sunday evening. 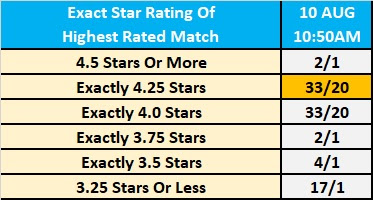 In these specials, customers had the chance to bet which - of two contrasted matches - would receive the most stars in Dave Meltzer's review of the PPV.

The first head-to-head had the Kevin Owens .vs. Shane McMahon and Charlotte Flair versus Trish Stratus opposing one another.

The winning selection turned out to be the Charlotte Flair .vs. Trish Stratus contest as it received three-and-a-quarter stars while Owens versus McMahon scored two stars.

As you can see from the betting, the consensus was evidently on Owens .vs. McMahon as the price was cut from EVS into 3/6 across the weekend.

The eventual winning selection went out from EVS to 6/4 in the same period.

From wagering, you can see that the customers backed the 'WWE Championship' match. It had started out at 19/20 on Saturday morning, but was down to 4/6 a few hours before the show started.

As a result of the 'WWE Championship' moving in, the bookies pushed 'Raw Women's Championship' out from 19/20 all the way to 13/10 while keeping the option to wager on both matches receiving an identical number of stars at 9/4.

Lynch .vs. Natalya did indeed beat Kingston .vs. Orton as it had three-and-a-quarter stars to the males' two-and-a-half.

In the first one - titled 'Curtain Raiser' - customers were asked to bet whether or not the first match of the main card would end up getting the most stars in Meltzer's review of the event.

Seeing as the main event won match of the night, it should go without saying that the 'No' was the winning selection. Looking at the betting, it appears at least one punter was of the opinion that the opener would not get the most stars as the 'No' was cut from 13/25 into 1/2 sometime before 3:30PM BST on Sunday afternoon.

The prop titled 'Joint Winners' allowed gamblers to bet whether or not there would be two matches sharing the award for the 'Highest Rated Match of the Night'. Once again, it was the 'No' which won as the four-and-a-quarter stars for Seth Rollins' Universal Championship win over Brock Lesnar was not matched by any of the other bouts on Sunday's card. The winning selection was 7/20 throughout the weekend.

'Lowest Rated' was a proposition which asked the customer whether Bill Goldberg versus Dolph Ziggler would get the least amount of stars in Dave Meltzer's review of the match.

If you look at the list of star ratings above, you'll see that Goldberg versus Ziggler was given three stars and there are matches that fall below three. Therefore, the winning selection - once again - is 'No'. It was 7/20 through the weekend.

'Yes' was the winning selection - at odds of 1/12 - in the prop named 'Title Match'. In this market clients were given the opportunity to wager on any of the championship matches on the SummerSlam card receiving the most stars in the review. 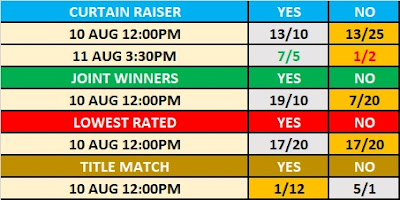 There were a few more NXT/SummerSlam Observer specials that also included NJPW G1 Climax. I'll get to them in another post in the very near future.