I have placed another couple of bets on WWE Crown Jewel 2019 with Sky Bet.

This time, I've gone with the new battle royal market.

If you recall from the battle royal at Super Showdown 2019, I took a gamble on Mansoor when he was 66/1 because he is billed from Saudi Arabia and thought it was worth a go.

That one worked out for me, so I'm once again going to that well and siding with another wrestler with Arabic heritage - Mojo Rawley.

As the winner of the bout will go on to challenge AJ Styles for the US Championship, the audience could get to see Rawley overcome the odds in the battle royal and then do a promo in Arabic to hype up the match for later in the card. 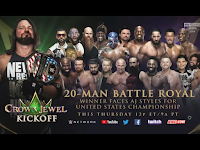 Seeing how emotional the crowd was for Mansoor's battle royal victory earlier this year, I can absolutely see WWE replicating the moment to a certain extent with another wrestler from Arabian heritage.

Rawley doesn't have to win the US Title challenge as the crowd will likely get the 'hometown' win from Mansoor against Cesaro to compensate anyway.

But they could get two Arab winners on the night if - and I'd say it's a big IF - Rawley gets to go over in the battle royal.

Rawley isn't the only name I've backed, though. I've also placed a bet on Buddy Murphy.

Of the names at the top of the list, he makes the most sense, but I still can't shake off the thought that they'll go with Rawley for the 'moment'.
Posted by David Taylor at 09:47