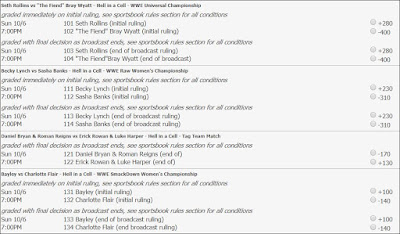 Three of the markets have been adjusted since this morning's post. All have seen the underdog's price reduced.

Bayley's price to successfully retain the WWE Smackdown Women's Championship is now at +100. It was +120 this morning. This now moves Charlotte Flair up from -160 into -140.

The other drop has been on Erick Rowan and Luke Harper, who have been cut from +250 into +130. Their opponents, Daniel Bryan and Roman Reigns, are now -170 favourites. The most recent price I have is -350.

Sasha Banks remains a -310 favourite to get a win over Becky Lynch (+230) in the WWE Raw Women's Championship match.

Prices correct as of 4:00PM BST. The latest can be found on The 5Dimes Website.
Posted by David Taylor at 16:17

Email ThisBlogThis!Share to TwitterShare to FacebookShare to Pinterest
Labels: WWE Hell in a Cell betting