As mentioned in a post published yesterday, Dave Meltzer's review of WWE Crown Jewel 2019 was published in this week's Wrestling Observer and Kambi has settled all of the star ratings specials that were installed for the PPV.

In this post, I'll take a look at all of the other specials that Kambi had for the show.

Highest Rated Match of the Night Betting
There was a dead heat in the market in which customers could gamble on the match they thought would get the most stars in Dave Meltzer's review.

The winning selections were 'Team Hogan .vs. Team Flair' and 'Any Unlisted Match'. The qualifying bout was the Mansoor versus Cesaro contest as both were given three-and-three quarter stars by the newsletter's editor.

Head-to-Heads
Two head-to-head markets were published. In these specials, the gamblers could bet which - of two matches - would get the most star ratings in Dave Meltzer's report.

Lesnar/Velasquez .vs. Rollins/Wyatt
The two major title matches on Thursday's card were opposed in the first head-to-head. Seth Rollins .vs. Bray Wyatt, for the 'WWE Universal Championship' started out at 3/4 while Brock Lesnar's defence of the 'WWE Championship' against Cain Velasuez was 11/10.

The Universal Championship match was backed into 8/13 while the Lesnar/Velasquez option rose to 13/10 in the time the market was available.

'Same Star Rating', which covered a tie, was 5/2 throughout.

As you may have read in yesterday's post, Seth Rollins .vs. Bray Wyatt had two stars. It did better than the minus two stars that was given to its opposing selection.

Dave Meltzer rated all of the matches in the World Cup individually. Of the matches involved, the highest number of stars - 2.50 - was given to two of those featuring Dolph Ziggler and Robert Roode.

I don't know how this market was graded, but I surmise that it saw the two-and-a-half stars going up against the three-and-three quarters for Team Hogan .vs. Team Flair.

Prop Bets
A trio of proposition markets were also published for the PPV.

The first, titled 'Joint Winners', asked customers whether two or more matches in Dave Meltzer's review would share the recognition as the highest rated match of the night. As we know, this did happen. Therefore, 'Yes' won at odds of 7/4 initially or at 19/10 later on.

The 'Main Event' prop wanted customers to gamble whether or not the final match on the card was rated the highest once Meltzer's review was written up. The 'No' fell from 7/20 to 2/7 between October 19th and 23rd. It was then taken down to 1/4 by lunchtime on October 26th.

The main event was the Universal Championship match, which was not the match of the night.

Finally, there was a special in which customers could bet 'Yes' to there being a match rated with negative stars in Meltzer's review. Crown Jewel was coming off a minus two star match in Seth Rollins versus Bray Wyatt at Hell in a Cell, so Kambi probably priced this one up with the Rollins/Wyatt rematch in mind. A match did indeed get a negative number, so those who may have took 7/4 would have had winning bets thanks to Brock Lesnar's WWE Championship retention against Cain Velasquez getting minus two stars. 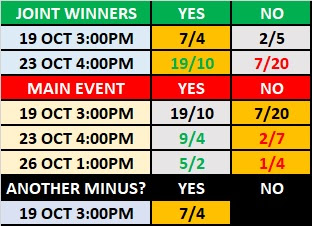 These markets were published by the oddsmakers from The Kambi Group. You can view their latest offerings through the link below.