All of the prices are the same as yesterday. They can be viewed in the image below. I'll write a few notes for each one underneath the picture. These will be in the daily order of the TV shows and not as they appear in the image. 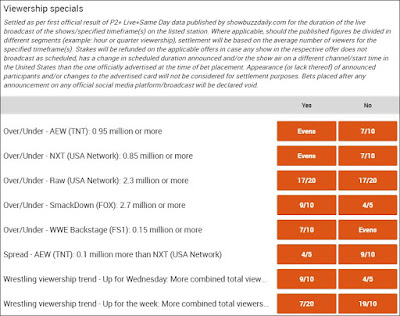 For tonight's edition of WWE Raw, the bookmakers have asked the customer whether the episode will be viewed by a total average of '2.3 Million or More'.

Last Tuesday's edition of WWE Backstage - featuring CM Punk's first proper appearance as part of the team - pulled in an audience of 180,000 viewers. This week, Kambi asks its customers whether the 26th November edition will have 150,000 or above.

Those who believe there will be '0.15 Million or more' viewers for WWE Backstage can find the 'Yes' as a 7/10 favourite while a wager on the 'No' is even-money.

The first proposition for midweek on the list is for Wednesday's edition of AEW Dynamite. It asks customers whether the show will have an audience of '0.95 Million or More'. The option to wager on it going under this number - 'No' - is a 7/10 favourite while the 'Yes' is EVS.

Last week's episode - which competed against an NXT show with Raw and Smackdown talent in the mix - had 893,000 viewers.

Last week saw NXT beat AEW for the first time since the two programmes went head-to-head on Wednesday nights. NXT's number was 916.000 so the line is lower than last week's number.

There are a couple of other AEW/NXT props.

The penultimate proposition on the list above sees the return of a bet that was first created last week. In it, customers can bet whether the combined number for Wednesday's AEW and NXT telecasts are higher than last week's total number.

Just like last week, there's an 'Up For The Week' prop in which clients can gamble whether or not the combined viewers for Raw, AEW Dynamite, NXT on USA Network and Smackdown on FOX is above or below last week's figure.