How Kambi Settled Its Observer Markets For NJPW WrestleKingdom 14

The latest issue of the Wrestling Observer Newsletter, with Dave Meltzer's reviews of the two nights of NJPW WrestleKingdom 14, was published this morning.

With the issue now out, the oddsmakers from Kambi have settled all of their Observer star ratings betting markets that were released for the two nights.

The main event of night one - which saw Kazuchika Okada successfully retain the IWGP Heavyweight Championship against Kota Ibushi - was awarded the most stars in Meltzer's reports of the wrestling extravaganza.

The bout received five-and-a-half stars from the reviewer. The next best, receiving five-and-a-quarter stars, was the IWGP Junior Heavyweight Championship contest which saw Hiromu Takahashi defeat Will Ospreay to once again become titleholder.

From betting, the Okada .vs. Ibushi match was a 13/10 joint-favourite to be the highest rated match in the reviews of the event. The other match - which was 'IWGP Heavyweight Championship versus IWGP Intercontinental Championship' main event for night two was awarded four-and-three-quarters. 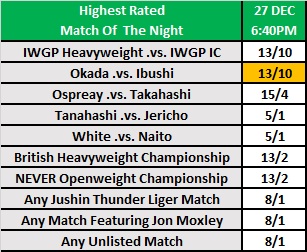 With Kazuchika Okada versus Kota Ibushi having 'Over 5.0 Stars', a market - in which customers were able to gamble on the 'Exact Star Rating of the Highest Rated Match' was settled with the favourite as the winning selection.

As you can see in the table below, the odds fell in favour of the eventual winner as the odds for it were snipped from 11/20 into 1/2 between December 27th and 28th.

Kambi has also settled the Over/Under markets that were released for the majority of matches that took place last weekend.

The lines, stars and O/U results can be viewed in the following table: 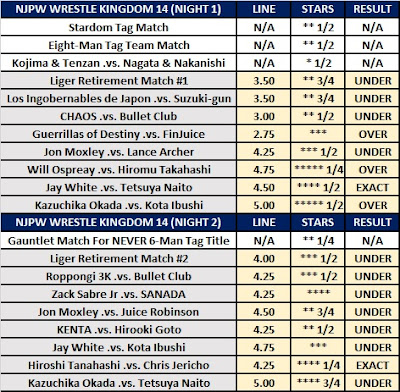 Head-to-head markets were also settled this morning. In these specials, clients could gamble on which - of two matches - would earn the most stars in the reviews.

The first two bouts that went up against each other was the Champion .vs. Champion match, that was set for the main event of night two, and what turned out to be the match of the event - Okada versus Ibushi. Both selections were EVS while the option that covered both matches tying was 2/1. It should go without saying that Okada .vs. Ibushi won that one.

Takahashi's IWGP Junior Heavyweight Championship win over Ospreay was a 17/20 favourite over the IWGP Intercontinental Championship match between Jay White and Tetsuya Naito (21/20) in the second head-to-head. As noted, the favourite came a quarter of a star short of sharing the match of the night honours with Okada .vs. Ibushi.

The third special had Hiroshi Tanahashi versus Chris Jericho (17/20 FAV) against 'Any Match Featuring Jon Moxley' (EVS) while the 'Same Star Rating' selection was offered at 12/5.

With Moxley regaining the IWGP US Championship in a Texas death match against Lance Archer on night one and then successfully defending the strap against Juice Robinson the following evening. the two bouts had respective star ratings of three-and-a-half and two-and-three-quarters. Neither match was able to better the four-and-a-quarter stars Meltzer gave to Chris Jericho's submission win over Tanahashi.

In the final head-to-head, any match featuring Jushin Liger was a 4/5 favourite over the IWGP Jr. Heavyweight Tag Team Championship match which saw Roppongi 3K beat Bullet Club's Taiji Ishimori and El Phantasmo for the straps.

The first match of Liger's retirement weekend was graded two-and-three-quarters while the following night's tag match alongside Naoki Sano - against Hiromu Takahashi and Ryu Lee did better with three-and-a-half stars.

The tag match also had three-and-a-half, so the winning selection turned out to be 'Same Star Rating'. The selection was 23/10.

Eight proposition markets were also graded today following Dave Meltzer's review having been published. Here are the results and then - below them - explanations as to what was needed in them. 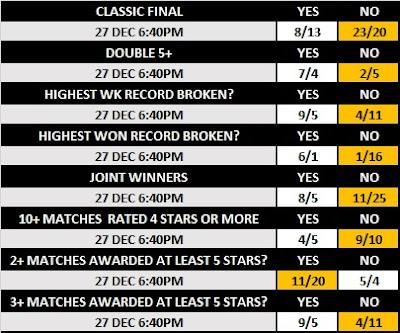 In the prop titled 'Classic Final', customers were asked whether a main event of night two would have five stars or more in Dave Meltzer's review. The winning selection was the 'No' at 23/20 as the match fell short of hitting five by only one quarter of a star.

In 'Double 5+', the customers were asked whether at least one participant would be awarded at least five stars in two or more matches from WrestleKingdom. 'No' won here as a 2/5 favourite.

The third prop had customers gambling whether or not the highest star rating for a match in WrestleKingdom history would be broken. The number to beat was six for Kenny Omega versus Kazuchika Okada from a few years ago. This year's top match did not beat that record, so the 'No' won again. This time, it was at odds of 4/11.

Proposition number four asked customers whether the outright record for Observer star ratings, which is seven stars for Omega versus Okada from Dominion 2018, would be broken. 'No' won as a 1/16 favourite.

In 'Joint Winners' clients were able to gamble on the prospect of two matches tying for the highest rated match of the event. With there being a sole winner, the 'No' won at 11/25.

The six proposition asked customers whether there would be ten matches or more graded four stars or higher in the reviews of the event. Looking at the results, I count six matches of four stars or above, so that would mean another victory for 'No'. It was 9/10.

The only win for 'Yes' came in the prop market in which people could bet whether or not two or more matches would receive ratings of five stars or above. The win came with the two bouts from night one. The winning selection was 11/20.

Similar to the previous prop, Kambi offered customers the opportunity to gamble on at least three bouts receiving five stars or more. The 'No' won as a 4/11 fave.
Posted by David Taylor at 17:02