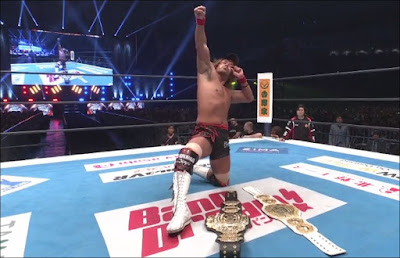 Earlier today, in the main event of night two of NJPW WrestleKingdom 14, Tetsuya Naito won the 'Double Gold Dash' by becoming New Japan's first-ever holder of both the IWGP Heavyweight and Intercontinental Championships.

He did so by defeating Kazuchika Okada for the IWGP Heavyweight strap. A little under twenty-four hours earlier, he had regained the IWGP Intercontinental Championship from Jay White.

The IWGP Heavyweight Championship win means that Naito was a winning selection in a Kambi betting market that was first published in mid-September.

In the WrestleKingdom 14 special, customers were asked to wager on who they believed would be holding New Japan's premier title at the conclusion of the second night of the event.

At the time when the market was created, there were hints of a title versus title match headlining the second night inside the Tokyo Dome.

Naito was holding the IWGP Intercontinental Championship at the time and was a 7/4 second-favourite behind the G1 Climax 29 winner, Kota Ibushi (EVS).

A few days after the market went live, Naito dropped the title to Jay White and he was then pushed out to 2/1 while White's odds were halved from 10/1.

As the build for the Double Gold Dash began to intensify, it was Naito's odds that began to descend. You'll see - in the table below - that, after drifting to the aforementioned 2/1, the eventual winner dropped to 6/4 favourite by October 2nd, was down to 19/20 a little over a month after that and then started early December at 4/5.

Before the New Year, he had lowered to 3/4 and remained at that price until the market closed early yesterday morning before he won the first of his two titles. 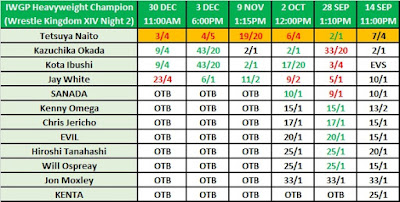 This market, along with other WrestleKingdom specials, came from Kambi's Pro Wrestling Coverage.
Posted by David Taylor at 18:32