Following the first week of XFL action, the Houston Roughnecks have become favourites to become 2020 Champions.

As of today, a winning bet on Houston to be crowned this year's winners will pay out at +250. This is down from the +700 customers from BetOnline were being offered last week.

In the February 7th post, I noted that Houston and DC were the teams I've gambled on to win the league. It's a case of so far so good.

The Roughnecks is one of three teams that have shorter odds than a week ago. The other teams are the New York Guardians (+750 to +600) and the St. Louis Battle Hawks (+700 to +600) who were also week one victors. 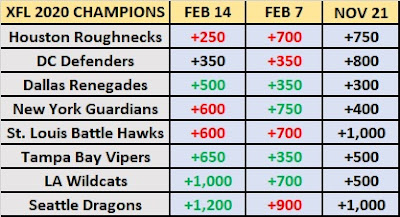 In Europe, it's somewhat different as the Defenders are the favourites at most websites. They're followed by the Guardians and then it's Houston.

My week one play turned out to be a winning one.

With not much to go by, I blindly backed the Battle Hawks as +10 underdogs. They won their away game against the Dallas Renegades straight up with a score of 15-9.

I now have some stats to work with, but - as I mentioned last week - I am reluctant to do what I do with my NFL/College betting due to not knowing the teams well and with the PAT scoring rule. However, I have backed the following team and totals for this week.


Overseas prices from BetOnline.
Posted by David Taylor at 17:56