New Japan Pro Wrestling will begin to conclude the second round of its New Japan Cup tournament within the next hour, so I've gone through the outright tournament markets to point out all of the adjustments that have been made.

If you've read THIS POST from yesterday, you'll be aware that Dave Meltzer's current favourite to be the 2020 winner is Tomohiro Ishii.

The selection for Ishii to triumph in the tournament has shortened since yesterday with the Stone Pitbull now at 7/2. This is down from the previous price of 10/1.

As you can see above, Ishii isn't the only wrestler whose price has shortened since yesterday.

SANADA, who will wrestle SHO today, has become a joint-favourite after having been lowered from 43/20 into 2/1. Previously - he was joint second alongside Kazuchika Okada, who is now up to 5/2.

Taichi is another wrestler whose price has been reduced within the last day. He is now at 12/1. This is down from 14s.

Hiromu Takahashi remains the favourite. However, he has drifted out to 2/1 from 6/4.

The market in which clients can bet on what they believe will be the final has also been adjusted since yesterday afternoon.

Matches with Ishii as a finalist have shortened.

Despite the Ishii matches shortening, the favourite has also been cut. 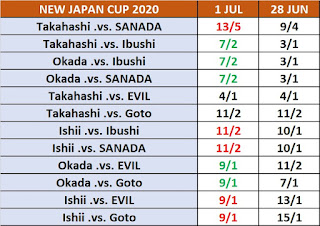 A meeting between Los Ingobernables de Japon stablemates, Takahashi and SANADA, which was originally 9/4 - is now at 13/5.

It's a match that, on paper, is intriguing as it would be two LIJ members battling to earn the right to challenge their leader - Tetsuya Naito - for the IWGP Heavyweight and Intercontinental Championships the following night.

Even though I haven't backed either of the favourites in the two markets, and have bets on Ishii and Taichi to win the tournament due to their odds being enticing when I struck my wagers, I believe the scenario of Takahashi beating SANADA to then give everyone the Naito/Takahashi match that was planned for the spring is where it could go.

But, would that be too obvious?
Posted by David Taylor at 10:13