EVIL has won the 2020 New Japan Cup tournament after beating Kazuchika Okada in the tournament final within the last hour. 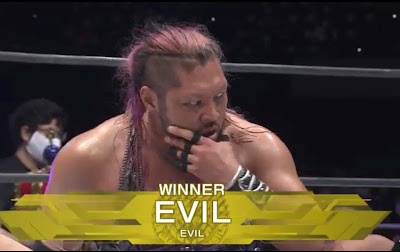 The winner entered today's match at 6/4 in a market in which customers of the betting agencies that uses Kambi's market could gamble on the outright tournament winner.

EVIL had started out at 12/1 when the market was initially priced up. However, his odds were moved to 15/1 on June 20th before they began to lower as the tournament progressed.

The New Japan Cup winner will now go on to face Tetsuya Naito for the IWGP World and Intercontinental Championships tomorrow at Dominion.

Following his win today, EVIL was celebrating when Naito came down. As they were both members of Los Ingobernables de Japon, Naito went to do the faction's fist bump. EVIL teased doing it before doing the Bullet Club's too sweet hand gesture and attacked his now former leader.

The new Bullet Club member is 8/5 to get a decision over Naito tomorrow. A decision on favour of the champ will pay out at odds of 11/25.

A couple of other match winner markets have been released for the show.

Shingo Takagi is a 1.3 faviurite to successfully retain the NEVER Openweight Title against SHO. A win for the challenger will pay out at 2/1.

In the other match confirmed for the event, Hiroshi Tanahashi and Kota Ibushi are 3/5 to retain their IWGP Tag Team Championship with a win over Taichi and Zack Sabre, Jr. (6/5).
Posted by David Taylor at 13:04