More Notes About BetOnline's AEW All Out 2020 Markets

In a follow up to the most recent post, there have been a number of adjustments made to some of the AEW All Out 2020 markets that can be found from BetOnline. 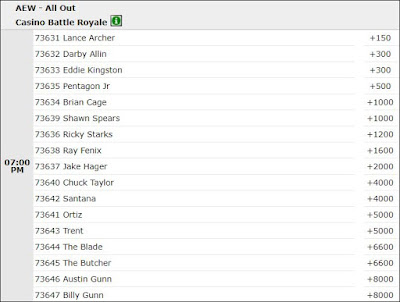 When I last wrote about the market for the Casino Battle Royale, I noted that the 'Pentagon Jr' selection had been descended from +5,000 into +3,300. It is now at +500.
Two other selections have shortened since I last wrote about this market.
Eddie Kingston's price has shortened since the most recent post. The odds are now at +300. This is down from +500.
Sean Spears is now at +1,000 from +2,500.
As for the other match markets, the following has happened:
Prices correct as of 10PM BST from BetOnline's Website.
Posted by David Taylor at 22:23

Email ThisBlogThis!Share to TwitterShare to FacebookShare to Pinterest
Labels: AEW All Out Betting