Notes About McIntyre, Cesaro And Uso In Elimination Chamber Betting

Drew McIntyre's odds to win the Elimination Chamber match for his WWE Championship have continued to slide on the Sky Bet this evening.

The current champ is now a 2/9 favourite to beat the field and retain his strap. He started off the day at 2/7, but was down to 1/4 earlier this evening.

With McIntyre's descent continuing, second-favourite - Sheamus - has risen to 4/1 from the 11/4 he started the day at. 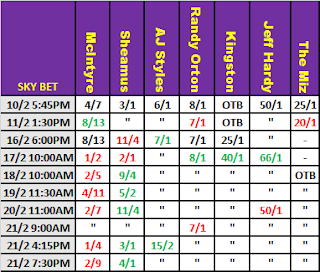 The only other price change that has been made in the WWE Championship market has seen AJ Styles move to 15/2 from 7/1.
Sky Bet's favourite to win the other Elimination Chamber match has also been travelling downwards today with Cesaro moving from 5/6 into 4/7 sometime before 4:15PM GMT and has since dropped into 8/15. 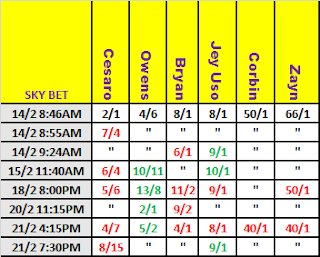 You'll notice, in the Sky Bet table above, that - as well as Cesaro - four other selections were lowered before my 4:15PM GMT visit.
The one of note right now is Jey Uso who fell from 9s into 8/1. He has since moved back up to 9/1 with Sky Bet but appears to have been backed once again on Kambi. 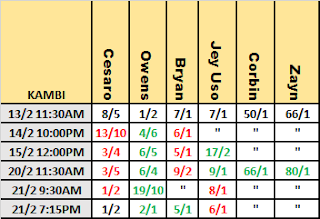 Roman Reigns' cousin is now at 6/1. This is down from the 8/1 customers were offered this morning and the 9/1 Kambi had him at yesterday morning.
Posted by David Taylor at 19:48