What usually happens on the morning of a PPV is I'd take a look through the 5Dimes Sportsbook's betting markets and then publish a post with all the price changes I've been able to follow. I am unable to do that today because, as of the time of writing, there are no betting opportunities available from the sportsbook and casino.
Therefore, instead of dedicating a post to 5Dimes' markets for tonight's Elimination Chamber, I'll choose to cover the overseas markets from BetOnline and also domestic prices from mainly Kambi, but also a few others.
WWE Championship
The reason why I've chosen BetOnline and mainly Kambi is because the former doesn't have a full range of markets for tonight's card and the others do.
BetOnline's market opened earlier this week with Drew McIntyre a -200 favourite to successfully retain the WWE Championship against Sheamus (+250), AJ Styles (+600), Randy Orton (+700), Kofi Kingston (+4,000) and Jeff Hardy (+5,000) inside the chamber.
By yesterday morning, the champ's price had lowered into -300 and was then cut into -400 by the evening.

The prices remain the same as of this morning.
Over at Kambi, McIntyre started off at 11/20 when the market was first installed on Thursday February 11th.
The favourite was then placed at 11/25 by 10:30AM GMT on Tuesday morning. It dropped into 1/3 before yesterday morning and - as of this morning's visit - has been lowered into 1/4.

As you'll see above, Sheamus' price was lowered from 21/10 into 17/10 a few hours after it was confirmed that he will be the final person to leave one of the pods in tonight's match.
Another name, whose price was lowered, is Randy Orton. He was taken down from 17/2 into 8/1 yesterday. However, he is now up to 9/1.
#1 Contender To Universal Championship
Both BetOnline and Kambi have markets for the other Elimination Chamber match that is scheduled for tonight's event. 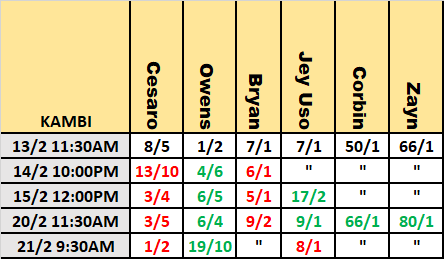 Kambi's was installed a week last Saturday with Kevin Owens a 1/2 favourite. Since then, his odds have been on the rise as the other two babyfaces in the match - Cesaro and Daniel Bryan - have been on the decline.
Cesaro's drop has seen him move into the betting favourite. He was placed at 1/2 sometime between last night and 9:30AM GMT this morning. Bryan, on the other hand, is third in betting - behind Owens - and is currently being offered at 9/2.
The only other name whose price is shorter this morning - when contrasted with yesterday - is Jey Uso, who has slipped from 9/1 into 8/1.
I made mention last week and yesterday that, even though I think Cesaro or Daniel Bryan will leave the chamber with the title shot against Roman Reigns, Uso would be my next pick just in case WWE ends up doing an angle in which Uso wins and then lays down for Reigns in the title match to give his cousin an easy night.
This leads to...
Reigns .vs. Chamber Winner
Kambi and other domestic bookmakers have a market for Roman Reigns' Universal Championship defence. BetOnline does not have one as of the time of writing.
Kambi's market was first installed a day after the match was announced. It kicked off with Reigns a 1/16 favourite over the 6/1 on offer for his challenger.
The market was reinstalled yesterday morning, after betting was suspended ahead of Friday's Smackdown, with the champion's price down to 1/20.

Kambi pushed the challenger's odds up to 7/1. This is in contrast to how Sky Bet has been adjusting the market for the match.
You'll see, in the table below, that the selection (I've named it 'Chamber Winner') has lowered from 8/1 into 5/1 in the period when betting has been available for the match.

Reigns remains Sky Bet's favourite to successfully retain his strap. However, his price has risen from 1/20 to 1/9 since I first became aware of the market on Thursday evening.
US Championship
Markets for the triple threat match for the WWE United States Championship have been available for both here and overseas. This is despite there being a question mark over Keith Lee.
BetOnline currently has Bobby Lashley as a -200 favourite to still be the US Champion at the conclusion of the match. If it happens.

Kambi also has Lashley at the equivalent of -200.

As you can see, the action appears to be landing on the challengers as Baszler and Jax - who started off at 13/20, but were down to 11/20 by yesterday evening - are now at 1/2 with Kambi.
With the champions' odds moving in, Sasha Banks and Bianca Belair have moved out to 7/5 after starting off  at 11/10 and spending some time at 5/4.
Sky Bet has Baszler and Jax at 4/7 to 5/4 for Banks and Belair while - on the Paddy Power website - customers can find the champs at 4/9 and the challengers at 13/8.
Prices were correct as of this morning. Most were taken from Kambi's WWE Betting Page and BetOnline's WWE Betting Page.
If this post, or any other post with Elimination Chamber coverage has been of interest to you, please consider shouting me a coffee on Ko-Fi.com. Doing so will help with the running of this blog. You can show your support by FOLLOWING THIS LINK or clicking on the button elsewhere on this page.
Posted by David Taylor at 11:25