With the Money in the Bank cash-in, from the WWE Tables, Ladders and Chairs 2020 event from December 20th,  being declared void in a subsequent storyline on WWE TV, the oddsmakers from Kambi installed new Money in the Bank specials.

The markets were created because the original ones were settled on an unsuccessful cash-in per all pro wrestling markets being settled on the result at the end of the respective broadcasts. 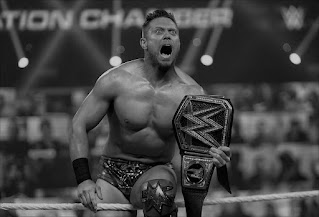 Four Money in the Bank markets were priced up at the start of the year.

The first was a prop bet which asked customers whether or not the cash-in would be a successful one. When it opened, the eventual winner - 'Yes' - was a 6/5 underdog to the 'No', which was 3/5.

Going by the betting, it appears as though the consensus thought the next cash-in would also be a failure as 'No' had fallen into 1/2 within twelve days.

The option to bet on the cash-in being a success was raised up to 7/5 due to the interest in the opposing selection.

Looking at the first sign of action, it appears as though the customers predicted the cash-in would occur at Mania because the price for that selection was snipped into 33/20. The other two options were moved up slightly with 'After WrestleMania 37' going to 12/5 and  'Before WrestleMania 37' having a slight increase to 1/2.

On the day before the 2021 WWE Royal Rumble, Kambi republished the market with its favourite - and eventual winner - down to 1/5.

When the 'Show of Briefcase Cash-in' market opened on January 5th, the bookies had 'PPV/Network Special' a 1/3 favourite over the 2/1 that would have paid out had the contract been executed on one of WWE's weekly TV programmes.

The eventual winner was down into 1/5 by January 17th and was then at a lower 2/13 a day before the Royal Rumble.
'Weekly TV' closed at 7/2.
'Drew McIntyre' was the winning selection in the market in which customers could bet on the 'Championship Challenged' by the briefcase holder. 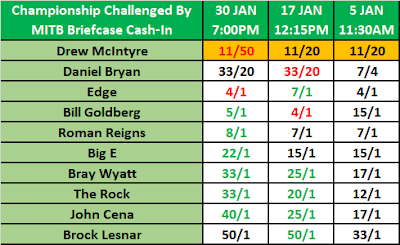 McIntyre started as an 11/20 favourite. However, a day before the Rumble, his odds had descended into 11/50.
All of these markets were unavailable in the weeks following the Rumble. However, there was a proposition market priced up for last night's show which allowed people to gamble on the prospect of there being a cash-in during the event.
Before the market closed, 'Yes' was a slight 4/5 favourite over the 9/10 for 'No'.
If this post, or any other post with Elimination Chamber and Money in the Bank coverage has been of interest to you, please consider shouting me a coffee on Ko-Fi.com. Doing so will help with the running of this blog. You can show your support by FOLLOWING THIS LINK or clicking on the button elsewhere on this page.
Posted by David Taylor at 23:24