G1 Climax 30 Outright Odds On Eve Of Tournament Kick Off

It's the eve of the start of the G1 Climax tournament and there have been more changes in the outright winner market from Kambi with two selections showing shorter odds. 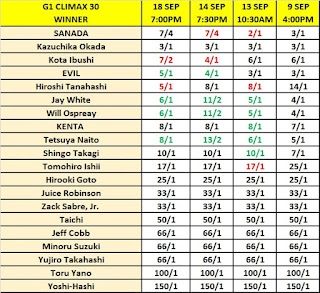 I have a feeling the price adjustments may have been a result of a podcast that was published on the Figure 4 Weekly / Wrestling Observer website within the last day.
In this week's edition of The Adam and Mike Show, the two hosts ran down the entire tournament. One of the scenarios that was brought up was the possibility of Tanahashi and his Golden Ace tag team partner - Kota Ibushi - both winning their respective blocks and facing each other in the final.
For what it's worth, even though the idea does make sense, I can't see Ibushi making another final after winning last year and being a finalist in 2018.
With that said, I liked the idea from Adam Summers enough to take a small gamble on Kota Ibushi .vs. Hiroshi Tanahashi to be the 'Exact Combination of Finalists' as the odds were 25/1. 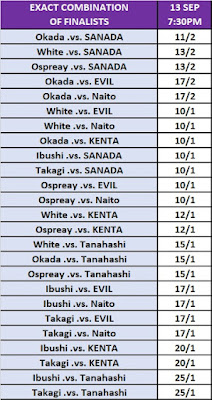 Posted by David Taylor at 20:02 No comments:

Kambi has published a market for a match that has been advertised for next week's WWE Monday Night Raw.

During the end segment of this week's edition of Raw Underground, Braun Strowman and Dabba-Kato almost squared off before Shane McMahon got in the middle of them to say that they would have to fight next week. 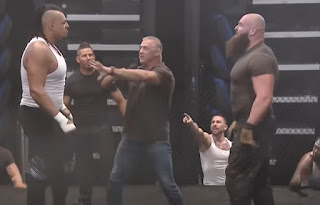 The oddsmakers are taking bets on three possible outcomes.
'No Official Winner' is a 7/20 favourite while Strowman and Dabba-Kato are both available at 23/10 each.
Posted by David Taylor at 10:52 No comments:

Here's an update in regards to Kambi's outright markets for this year's G1 Climax tournament.

A Block Winner
When I checked in on Sunday night, I noticed that Taichi's odds to be the A Block winner had lowered from 33/1 into 17s. The odds remain at this price as of today.

With Taichi lowered, the bookmakers moved Shingo Takagi up from 9/2 to 11/2. He remains at this price.

Yesterday saw some more changes with Kota Ibushi taken down from 9/2 into 11/4. Will Ospreay and Jay White have both moved up from 5/2 with Ospreay at 11/4 and White at 7/2. 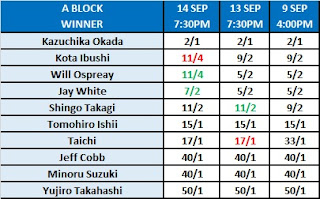 B Block Winner
When I looked over the B Block odds last night, I noticed that SANADA has once again dropped. He's now at 23/20. This is down from 6/4. 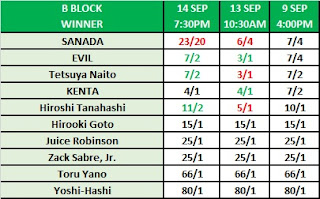 As you can see above, three selections have drifted out with Hiroshi Tanahashi now at 11/2 from 5/1. EVIL and Tetsuya Naito - who were both 3/1 - are now at 7/2.
Outright Winner
SANADA's odds to be the outright winner have lowered from 2/1 into 7/1, but he isn't the only name whose price has been reduced.
Last year's winner - and 2018 runner-up - Kota Ibushi is now in joint-third alongside EVIL after lowering from 6/1 into 4/1. 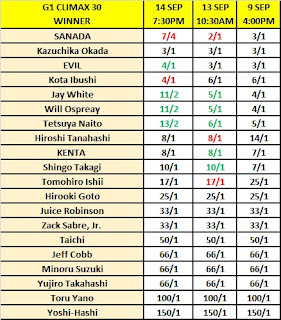 Kambi's markets for the matches that have been advertised for this evening's WWE Monday Night Raw have now closed.

In this post, I'll go through each market and point out the early and latest prices I noted from my visits t the websites over the past six days.

The Street Profits started off as 1/2 favourites to beat Cesaro and Shinsuke Nakamura in the match that will see the main roster tag team champions meet.

The first adjustment I noticed came in favour of The Street Profits as their price was down to 11/25 a couple of days later. As a result, Smackdown's titleholders had moved out to 8/5.

Cesaro and Nakamura's price was down slightly to 6/4 yesterday morning while their opponents' odds had been moved out to 4/9.

WWE Raw Women's Champion - Asuka - was 1/20 and her opponent, Mickie James, was 7/1 when I came across the market on Tuesday evening. Then - when I visited yesterday morning - I noticed that the challenger's odds had been lowered into 5/1.
As a result, Asuka was moved to 1/10. However, when I had a look this morning, Asuka had dropped into 1/14 and James was out to 11/2.


Dominik Mysterio was an 11/25 favourite to beat Seth Rollins in their steel cage match when I noticed the market at 8PM last night. His price was down to 2/5 this morning.
With Dominik lowered, Rollins was moved up from 8/5 to 7/4.


WWE Champion, Drew McIntyre, was a 1/4 fave to get a W against Keith Lee in their meeting. However, when I had a look this morning, McIntyre was 1/6 while Lee had increased to 13/4 from 5/2.
Posted by David Taylor at 21:41 No comments:

When I was looking through Kambi's pro wrestling markets last night, I noticed that the oddsmakers had released more G1 Climax 30 match markets to go alongside those for nights one and two.

I revisited the website this morning and noticed that one of the markets had changed. I've noted the differences below the match.

(The market was originally, Ibushi 4/6 and Ospreay 27/25, so Ibushi's price has shortened)

Posted by David Taylor at 13:52 No comments:

The oddsmakers from Kambi have released more NJPW G1 Climax 30 markets since this morning's update.

Customers can now find match markets for the first two nights of the tournament as well as Wrestling Observer star rating over/unders and other props.

The early prices for the matches are:

I have had a few bets. All have been placed on underdogs because I find that there are usually a couple of upsets on the opening nights.

In no particular order, I've backed:

Jeff Cobb to beat Taichi,  Goto to beat KENTA (Think this might be another year where Goto will struggle to pick up wins and KENTA will get some so it's probably a good spot to get Goto a win here and - at 3/1 - I liked the odds), Tanahashi over Naito (if this were a summer G1, I would have been slightly more confident in this pick as a win for Tanahashi here would set him up as a challenger for a future event), Zack Sabre Jr over EVIL (Possibly the one I like the least, but the 5/2 was appealing considering ZSJ has been an opening night shock winner in the past), Yano over SANADA (Yano is always the banana skin in the tournaments. I have SANADA to be the outright winner so let him stumble early).

Six Observer O/U markets have been published for the matches. The bouts, and their lines, are:

Posted by David Taylor at 14:15 No comments:

Kambi's betting markets for the upcoming NJPW G1 Climax tournament were republished today.
There have been adjustments made in all but one of the markets.
The market, in which customers can gamble on the A Block winner, still lists Kazuchika Okada as a 2/1 favourite. In fact, the entire list is showing the same pricing as Wednesday. 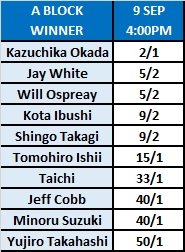 SANADA is now a 6/4 favourite to win the B Block. When I last wrote about this market, both he and EVIL were 7/4 joint-favourites. The latter has now moved up to 3/1.
As you'll see, in the table underneath, SANADA isn't the only wrestler whose odds have shortened since the market was last available.
IWGP Heavyweight and Intercontinental Champion - Tetsuya Naito - is now at 3/1. He was previously at 7/2.
Another name with shorter odds than Wednesday is Hiroshi Tanahashi. His odds have been halved from 10/1. 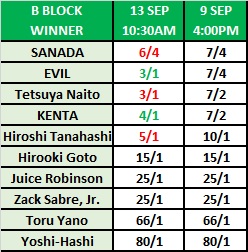 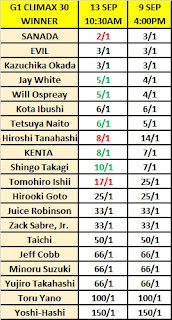 Posted by David Taylor at 10:56 No comments:

In what might become a regular thing for at least the next few weeks, I've decided to write about Kambi's pro wrestling TV viewership prop bet results in one single post rather than publishing separate posts for each night of TV.
Here are all the props - and their respective results - starting with Monday's Raw right through to last night's edition of WWE Smackdown.
7/9/20 - WWE Monday Night Raw
The September 7th episode of WWE Monday Night Raw had a total average audience of 1,725,000 viewers.
With that number, the winning selection - in the prop for the total average audience - will be settled with 'No' winning because Kambi asked its customers whether the show would do better than at least '1.85 Million'.

The wagering once again appears to have gone the wrong way because 'Yes' was the selection that was lowered. It went from 4/6 into 11/20 while 'No' was pushed out to 5/4 from 27/25.
8/9/20 - WWE NXT
The episode of WWE NXT Super Tuesday II that aired on the USA Network on September 8th had a total average of 838,000 viewers.
Kambi asked its customers whether the programme would have a total of at least 850,000 people tuned in.
As you'll see, in the table below, the winning selection was 3/4 on Sunday. It was down into 13/25 within a day and was then down to 21/50 by Tuesday evening.

9/9/20 - AEW Dynamite
Wednesday's AEW Dynamite on TNT had a total average of 1,016,000 viewers. This good result means that the prop market for the show's audience was won by 'Yes'.
In the prop, customers were asked whether or not at least 950,000 people would tune in. As you'll see below, the betting went the way of the 'No' as it fell from 9/10 into 1/2 across the days the market was available.

The eventual winner was 7/5 on the day of the programme. It had started out as a 4/5 favourite.
With the viewership numbers for AEW Dynamite and Tuesday's WWE NXT official, a prop which asked whether AEW Dynamite would beat its competition by at least 100,000 was also settled.

The final prop for the week asked customers whether Smackdown would beat Raw by at least 200,000 viewers. With Raw getting 1,725,000, the difference was 536,000. Therefore, the winning selection was 'Yes'.
As you can see from the betting, the odds for the eventual winner increased due to potential bets coming in on the 'No',
'Yes' was moved up from 6/5 after starting out at 27/25.

Posted by David Taylor at 16:37 No comments:

Over/Under markets were published for nearly all of the matches on the card. In the table below, I've recorded the bookmakers' lines, the amount of stars Dave Meltzer gave in his review of the event and the betting results.

There are also some notes that can be found below.

Notes
1. A market for the tooth and nail match between Britt Baker and Big Swole opened with a line of 2.75 Stars on September 3rd. However, it didn't last as it was removed. I surmise this was after it became clear that the bout would be 'cinematic' and would get no rating, which is in fact what happened as Meltzer did not grade it. Therefore, the result is 'void'

2. Kambi started off with a line of 3.50 Stars for the Casino Battle Royale. However, this was lowered into 2.50 Stars. The bout received two-and-a-half stars in the review, so the results are 'Under 3.5 Stars' (for those who may have bet when the line was 3.5) and '2.5 Stars or More' (the result of the second line)

3. Matt Hardy's injury in the opening minutes of the broken match with Sammy Guevara resulted in the bout not getting a grade. Another void result

4. Initially, the line for Chris Jericho .vs. Orange Cassidy was set at 3.25 Stars. It was later increased to 3.50. The match was given three-and-a-half stars so those who took the '3.25 Stars or More' or '3.50 Stars or More' would have been on the correct side or sides

5. The AEW Championship match started off with a line of 4.50 Stars. It was later reduced to 4.25 Stars. Jon Moxley's win over MJF received four-and-a-quarter, so the winning selections will be 'Under 4.50 Stars' from the earlier line and '4.25 Stars or More' for the later one.

Posted by David Taylor at 13:29 No comments:

Email ThisBlogThis!Share to TwitterShare to FacebookShare to Pinterest
Labels: AEW All Out Betting, Observer Betting

Now that New Japan Pro Wrestling has announced the participants, and their respective block allocations, for this year's G1 Climax, the oddsmakers from Kambi have published betting markets for the tournament.
As of the time of publishing, customers can find three outright markets available. The first allows punters to gamble on the winner of A Block, the second is for B Black and the third is an outright winner market.