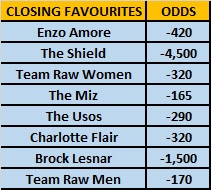 The one in 7-1 was The Miz, who lost to Baron Corbin in the middle of the show.

Miz had started off the PPV as a -170 favourite. Although I believe it's worth noting that it wasn't only during the event that Baron Corbin's price dipped.

The Lone Wolf's odds had also declined shortly after 10pm GMT. They went from +265 to +100 within forty-five minutes before drifting back out before the slight dip as the event was in progress.

Another thing worth pointing out is that - in the post that I published shortly after Survivor Series had begun, where I noted all the favourites - Team Smackdown Men were favoured to win the main event. I made it a point to preface that the European sportsbooks had taken wagers on their opponents.

Team Raw Men declined during the show. So this was a case of the European bookies behind ahead. You can see in the table below how I tracked the odds since Friday evening . It was a back-and-forth throughout, but the main point is that the right favourite closed as Team Raw was the eventual winning selection.


As you can see, the winners were +140 ahead of the PPV and and had fallen to -120 pick 'em along with Team Smackdown by 2:25am. There was another see-saw before eventually closing out as -170 faves.
Posted by David Taylor at 11:52