Kofi Kingston's WWE Championship victory over Daniel Bryan at WrestleMania 35 was given the most stars in Dave Meltzer's review of the event.

The review, which was published in the latest issue of the Wrestling Observer Newsletter, listed the match at four-and-a-half stars. The match that came the closes to it for Match of the Night plaudits was the Smackdown Tag Team Championship fatal four-way which saw The Usos successfully defend their straps against Aleister Black and Richochet, The Bar and Shinsuke Nakamura and Rusev.

Now that the reviews of WrestleMania - and other shows from the weekend - have been released, Kambi will settle Wrestling Observer themed betting markets that were available to customers in the weeks leading into the shows.

The WWE Championship match was one of three 5/2 favourites when a market for the 'Highest Rated Match of the Night' was first installed. It, along with the 'Raw Women's Championship' match (the selection wasn't renamed despite the Smackdown title eventually being added to the mix) was cut to 9/4 within the initial five days but - following the women's triple threat match mainly being backed, the eventual winner found its way back at its earlier price a day before the market closed. 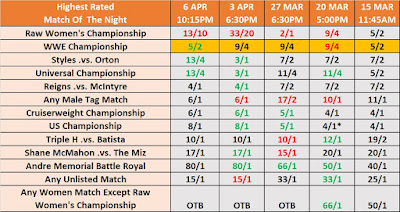 With the four-and-a-half stars for the WWE Championship being the highest amount given for any of the bouts on Sunday's card, another market - in which customers could bet on the 'Exact Star' rating of the match with the best grading from Dave Meltzer.

The eventual winning selection was 2/1 from 15 March right up to just before the event's Kick Off on Sunday night.

There were many more Observer star ratings specials available for last weekend's shows. I'll write all about them across the next day or so.

These markets were available from sportsbooks that offer Kambi's WWE markets. One example can be viewed below.