It was another jaw-dropping moment when I checked Kambi's New Japan Pro Wrestling betting markets this evening.

The oddsmakers have added more to their coverage of the upcoming G1 Climax tournament.

Customers can now bet on the winners of the main bouts that are scheduled to take place over the coming weeks. They can also punt on the Wrestling Observer star ratings the matches get in Dave Meltzer's reviews of the tournament by wagering on the Over/Under specials that have been created,

In this post, I'll show all of the early prices for the match winner markets and star ratings markets.

The first table is of the match winner markets. I have written them out just like a sports game with the odds for the first wrestler mentioned representing the '1'. His opponent will be the '2'. 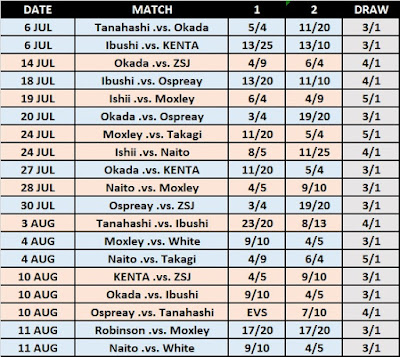 Correction: The 'Draw' for the Ibushi .vs. KENTA match on July 6th should read 5/1 rather than 3/1. This will be amended in future posts


Now, here's where this table kind of gets tricky if I don't explain it properly - I have added 'Draw' because the bookmakers have the option to bet on the matches ending in a draw in the 'Match Props' section below each match winner market. It's important to note that - should you bet on either of the wrestlers to win the match, and it results in a draw - bets will be voided as a tie isn't factored in in the regular match market. I felt that I had to give coverage to the 'Draw' proposition because there could potentially be draws.

The Over/Under star ratings lines for each match - and the odds for the three options as of the time of writing - can be viewed below. 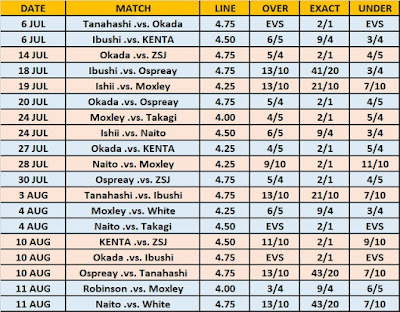 I haven't placed any bets on the Observer O/Us, but I've had a few small bets on some of the matches. Here's what I've done along with some reasoning (in no particular order).

KENTA to beat Kota Ibushi on July 6th
I think Ibushi is going to win the tournament, so have backed KENTA to win on the first match. Plus it'll be KENTA's debut so that's why I think he's worth a gamble.

Will Ospreay to beat Kazuchika Okada on July 20th
We've established that I believe Ibushi should win the tournament. I think Will Ospreay will go far, though. Plus, there is a thing that NJPW likes to do in the G1 by having champions lose big matches to set up some bouts for the autumn. They're both in the CHAOS faction, so this would be one way to get them to compete against each other post-G1.

Juice Robinson to beat Jon Moxley on August 11th
We've seen Jon Moxley beat Juice Robinson a few weeks ago. This match will be their final Block matches and I think there's a chance Robinson could play spoiler and - at the same time - set himself up as a future challenger to Moxley's United States Championship.

Ospreay .vs. Tanahashi to be a draw on August 10th
I bet on this match being a tie because I have a feeling there will be one on the final nights of the block rounds.

Kazuchika Okada to beat Kota Ibushi on August 10th
I have bettor's remorse already on this one, but I'll explain why  I did it. As you'll likely be aware by now, I have Ibushi to win the G1 and then head on to WrestleKingdom to challenge Okada for the IWGP Heavyweight Championship. I thought it was worth backing Okada to win this one, but - after thinking it through, and because it's going to be on the final night of A Block - Ibushi might need to win this one to top A Block. Or...

Kazuchika Okada .vs. Kota Ibushi to end in a draw on August 10th
Like I said, I have a feeling there will be at least one draw on the final nights of the blocks.

I'll write more about these markets over the coming days

June 27th Update: I've also bet on KENTA to beat Okada. I wrote a bit about it at the end of THIS POST.