Next Title To Change Hands Betting Update For June 5th

The fifth edition of Sky Bet's 'Next Title To Change Hands' market has been adjusted since I first wrote about it yesterday morning.

The Women's Tag Team Championship remains a favourite to be the next title to switch owners. However, its price is now down to 9/4 after opening at 11/4.

It's unsurprising to see the title lowered. With The IIconics crossing brands as champions, they have had issues with Nikki Cross and Alexa Bliss on Raw and The Kabuki Warriors on Smackdown.

However, with that said, I would overlook the favourite for the time being as there is a PPV on Friday which does not have the women's tag title on the line.

The Women's Tag Team Championship isn't the only selection to have shorter odds than yesterday.

The Raw Tag Team Championship has dipped from 8s into 7/1, Smackdown's tag titles are 11/1 from 12/1 and Smackdown's Women's Championship - currently being held by Bayley - has been lowered to 12/1 from 14/1. 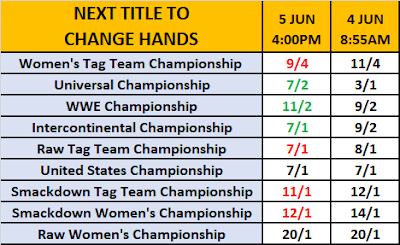 Email ThisBlogThis!Share to TwitterShare to FacebookShare to Pinterest
Labels: Next Title To Change Hands Special