As has become a regular for WWE events, customers can choose to bet on a handful of star ratings themed markets. In this post, I'll go through the variety of specials that are available.


Prop Bets
The bookies have published four proposition markets in which customers can bet on certain things happening. You can see the prices for the 'Yes' and 'No' selections for each prop in the table below.

The image doesn't show the full description for each prop, so here's what each one means:

Curtain Raiser
In this special, you're betting whether or not the first match on the main card receives the most star ratings in Dave Meltzer's review of Extreme Rules.

Joint Winners
In this proposition, customers are wagering on whether there are at least two matches on the card with the highest amount of stars in the review.

Main Event
The prop titled 'Main Event' asks the customer 'Last match to start to be awarded the highest star rating (including joint winners and pre-show but excluding matches not advertised before the start of the event).

Title Match
The proposition named 'Title Match' is for a bout 'valid for any championship to be awarded the highest star rating'.

Highest Rated Match of the Night
Customers can also bet on the match that they believe will receive the most stars when the issue of the Observer with the Extreme Rules review is published.
Ricochet .vs. AJ Styles - for the WWE United States Championship - is unsurprisingly the favourite. It's followed by 'Any Male Tag Match', which is also understandable considering you have Daniel Bryan in one tag match on the card and then - in another - there's The Revival and The Usos. 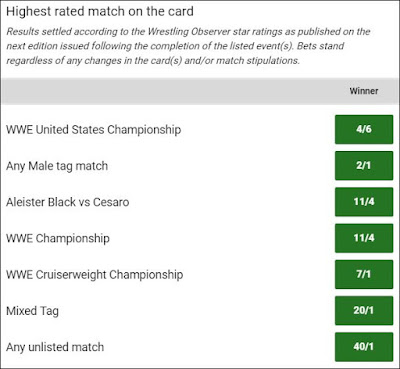 Exact Star Rating
Another frequent special allows punters to gamble on the exact star rating that is given to the match - or matches - that have the most stars in Dave Meltzer's review. There are 7/4 joint-favourites in 'Exactly 4.5 Stars' and 'Exactly 4.25 Stars'. 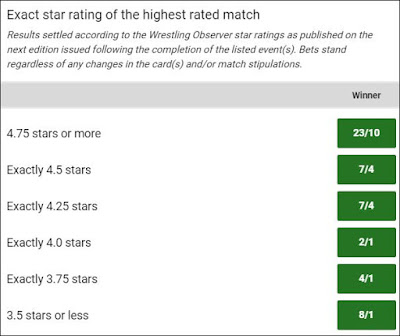 Head-to-Heads
The oddsmakers have created two head-to-head markets in which two matches compete against each other to be 'awarded the highest star rating'.
This weekend's competition starts with The Revival .vs. The Usos go up against the triple threat match for the WWE Smackdown Tag Team Championship in the first matchbet.
As I wrote above, the male tag matches make sense as second favourites to be match of the night, so it's fair competition. 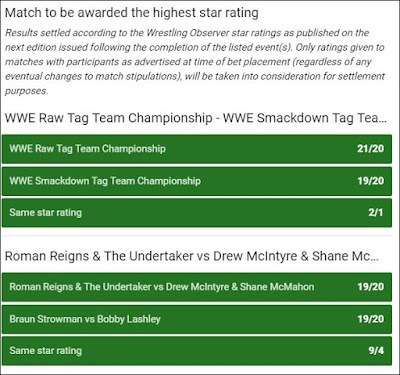 
Over/Unders
The most popular Wrestling Observer star ratings markets from Kambi are the Over/Under specials where customers can bet above, below or exactly on the bookmakers' predicted star rating for that particular match.

For example, with the US Championship match being regarded as the potential match of the night, they have set the line for the bout at 4.25 Stars. Customers can then choose to bet whether Dave Meltzer's rating for the match will be higher, lower or land exactly on four-and-a-quarter stars.

Below are the lines for all of the matches that are currently scheduled for the PPV.


My Bets
What I usually do before each PPV is predict Kambi's lines before they're. I then compare my line with theirs and place a few bets. However, I was unprepared this time as their lines went up before I remembered to do mine.

I am going to blindly back Bayley .vs. Alexa Bliss and Nikki Cross to go over the line of two stars. Bayley and Alexa Bliss tend to have bad matches and that's obviously why the line is set so low. What is worth noting is Alexa Bliss is reportedly suffering from a sinus infection and that's why she has been off TV this week. Therefore, I reckon the match will be mostly Bayley and Nikki Cross. In fact, even if Bliss wasn't unwell and the match was always going to be 2-on-1, I would have said it would mainly be Bayley and Cross working together with Alexa coming in for the potential winning spots.

Prices and lines were correct as of 8:30AM BST.