It has been a while since I published an update about the NJPW G1 Climax 29 winner markets from Kambi, so - seeing as some of them were adjusted last night - I thought I'd do a catch up.

First, I'll start with the market for the B Block winner because it hasn't changed since last week.

As you can see below, Jay White and Tetsuya Naito are still 6/4 joint-favourites to win the second block.

The only participant whose odds have slipped is Tomohiro Ishii. He was lowered from 15/2 into 11/2 within the first three days the market was opened. 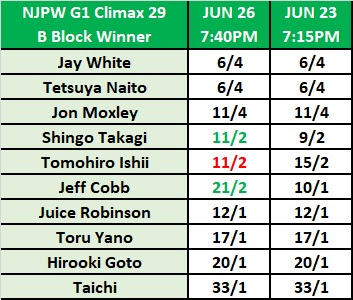 The A Block Winner market initially had Hiroshi Tanahashi and Will Ospreay moved to 11/4 from 7/2 and 5/1 respectively. 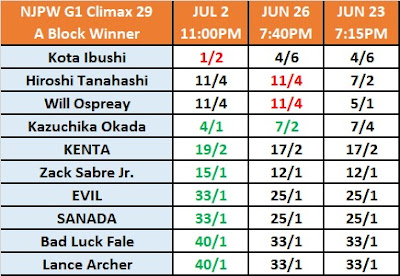 The early favourite to win the block - Kota Ibushi - stayed at 4/6 when Tanahashi and Ospreay moved in before 7:40PM BST on June 26th.  However, when the market was adjusted last night, Ibushi's price was shortened to 1/2.

Despite lowering in the A Block Winner market, Ibushi has drifted in the outright winner market. He had started off at 5/4 but is now up to 13/10.

There are other selections with shorter odds than the first day of betting.

Hiroshi Tanahashi was snipped to 4/1 from 5/1 within the first three days.

Shingo Takagi was lowered from 20s into 17/1 yesterday.

All of the other selections' prices can be found in the table below. 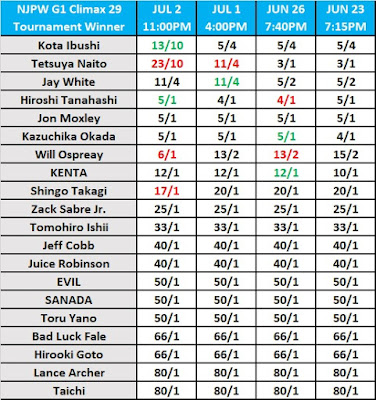