After watching SummerSlam live, I went to bed and woke up half an hour before the start of today's NJPW show to get the late Kambi odds for the G1 Climax final. Unfortunately, I missed them so all I can work with as the final is in progress are the prices that I wrote about yesterday.

A match winner market was published early yesterday evening with A Block winner - Kota Iushi - a 13/20 favourite. His opposition - Jay White - was 11/10.

I also pointed out that there were 'Match Duration' and Wrestling Observer star ratings markets for the bout.

The line for the 'Match Duration' was set at twenty-seven minutes. The oddsmakers had the 'Over' at EVS while the 'Under' was offered as a 7/10 favourite. As noted in the aforementioned post, I took a gamble on the match lasting longer than twenty-seven.

Even though I missed the NJPW markets being taken down, I did find new All Elite Wrestling markets.

The bookmaker has released a match winner market for the Cody .vs. Shawn Spears match that will take place at AEW All Out. As of this morning, both wrestlers are at 17/20.

An Observer star ratings market is also available. The line is 3.75.

Those aren't the only new AEW markets. There is a special that's specific to the AEW TV show debut on TNT. 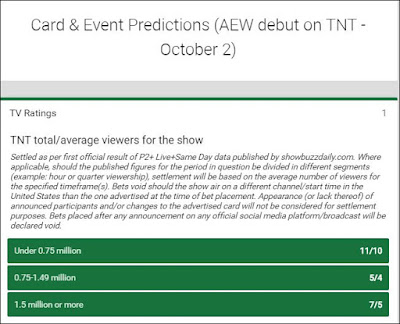 I have an opinion about the AEW TV number that should point me to betting on the 'Under'. I don't even know if I want to bet against the company, but I feel there's something glaring that I am aware of that makes me believe - or rather, have an uneducated guess - the debut episode will not go beyond 750,000.

And I'm not even referring to NXT possibly being on FOX Sports to siphon off some of the audience.

Take a look at AEW's social media numbers. It does not paint a pretty picture in my eyes.

You would call a portion of those numbers 'hardcore', but then you have to take a portion away as there's bound to be a percentage that lives outside of the US, so would not be able to watch the show on TNT.

It's important to note that AEW has built its ticket and PPV business from social media, so I personally think that the social media numbers are important here even though, like I said, this is all guesswork on my part.