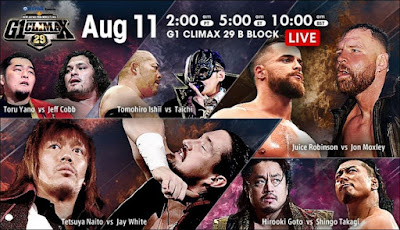 The final round of block matches in this year's edition of the NJPW G1 Climax tournament should be getting underway in a little under an hour, so I thought I would show you the prices for the three matches that Kambi is accepting wagers on.

The third bout of tournament matches will see Jon Moxley and Juice Robinson compete. Moxley is one of the four wrestlers tied in first place of B Block with ten points. He would need a win to have any chance of booking his place into tomorrow's final.

As I wrote back when the match markets were first installed, I feel Juice Robinson could play spoiler here. My gut instinct kicked in back in June when both wrestlers were available at 17/20.  As you'll see in the table below, the weeks of back-and-forth betting has resulted in Robinson being a 1/5 favourite. A decision in favour of Moxley is now being offered at 3/1.


Match number four is between Hirooki Goto and Shingo Takagi with Goto another one of the four with ten points at the top of the table.

The market for this match was first published a couple of days ago with Goto an 11/25 favourite, but I once again went into my 'spoiler' mindset and backed Takagi at the 8/5.

Since then, it seems others are also of the opinion that Shingo could be a spoiler as he has moved into favouritism. He currently rests at 1/2 while Goto has moved up to 7/5.


The main event of the evening will be a clash between the two remaining ten-point wrestlers - Tetsuya Naito and Jay White.

One reason why I believe that Ibushi .vs. White could be the final is because we've seen Naito and Ibushi wrestle a few times already this year.

If it is White's block, I think it's worth pointing out the tiebreakers. Moxley can afford to win the Robinson match but Goto would have to draw or lose his because White holds a tiebreak win over Moxley but not Goto.

For Naito to secure the block, he would need Moxley to draw or lose but it wouldn't matter about Goto's result as Naito holds a win over him from night six.