This week's episode of the Wrestling Observer Newsletter includes Dave Meltzer's reviews of the final three nights of this year's NJPW G1 Climax tournament. Therefore, Kambi's oddsmakers will now be able to tie up the loose ends and settle the remaining G1 Observer markets that were published before - or during - the tournament.

In this post, I'll write about the last seven Over/Under star ratings markets that Kambi published starting with the last night of A Block and ending with the Kota Ibushi .vs. Jay White final.

The winning selection turned out to be the 'Exactly 4.50 Stars' because Meltzer graded it exactly where Kambi had estimated.

As you can see below, the best price customers would have found was the 43/20 that was available from late-July to early August.

This is another one where 43/20 turned out to be the best price. This was available when the market was initially priced up. It was lowered to 2/1, but went back up to 43/20 in the later round of betting.

The star rating result means that the winning selection will be the 'Over' as Kambi had the line set at 4.75.

Its best price was the earliest available - EVS. The selection began to slip a month later and closed at 4/6.

Jon Moxley .vs. Juice Robinson
Juice Robinson's win over Jon Moxley was given four-and-a-quarter stars in Meltzer's review of night eighteen. This went 'Over' the line of four stars.

The result was another one for the 'Over' as Meltzer's rating was a quarter of a star above the line.

Kambi's best price for the 'Over' was the closing 13/10. It moved out to that number from 23/20 a couple of days after opening.

Tetsuya Naito .vs. Jay White
Jay White's win in the B Block decider against Tetsuya Naito was given four-and-a-quarter stars in the report. This was below Kambi's line of 4.75, so the winning selection turned out to be the 'Under'.

As you can see from the betting, the customers evidently thought that the line was set too high as the odds for the 'Under' were lowered across most of the time that the market was available. However, the last sign of action appears to have gone the way of both the 'Over' and 'Exactly' options as the 'Under' was moved up.

Kota Ibushi .vs. Jay White
The G1 Climax 29 final had a line of 4.75 stars when the Over/Under market was published on Sunday evening.

Meltzer rated the match five-and-a-half stars, so the winning selection is the 'Over'. It was 6/5 when the market was opened.

Results From All Of Kambi's G1 Climax 29 O/U Markets
Here's a table with the complete star ratings results for all of the G1 Climax 29 matches that Kambi had Observer markets for.

They start with the Kota Ibushi .vs. KENTA match from night one all the way through to the final from August 12th. 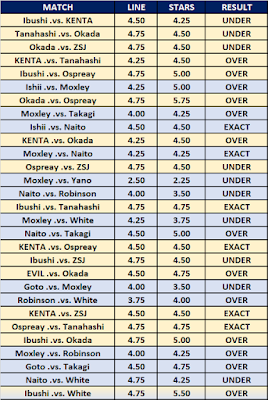