Now that this year's G1 Climax has ended, and the edition of the Wrestling Observer Newsletter with Dave Meltzer's final reviews of the events has been published, I intend to take a look back at the Observer-themed betting markets that Kambi had available for customers in the weeks leading into and during the tournament.

In this post, I'll cover the markets in which customers could have placed wagers on the Match of the Tournament.

The bout that ended up with the most star ratings out of all of Dave Meltzer's reviews of the tournament turned out to be the A Block meeting between Kazuchika Okada and Will Ospreay from the seventh night.

The bout took place on July 20th. As soon as I watched it, I thought it had a strong chance of being the best match of the tournament, so backed it when it was 5/1. A few days after that, Dave Meltzer's match report was published in the Wrestling Observer Newsletter and the editor gave the contest the five-and-three-quarter rating.

Still, there were many more nights of action left and Kambi continued to accept wagers on that bout and others albeit, not long after the match was confirmed as a 5.75 classic, the bookies slashed its odds to 1/10.

It was moved up to 1/8 a day before the final block rounds began and stayed at that price. The move up coincided with bets coming in on a potential Kota Ibushi .vs. Tetsuya Naito final being the match of the tournament. The odds for that selection went down from 40/1 (Jul 28) to 7/1 (Aug 2) to 4/1 (Aug 9) and closed at the 13/4 it had fallen to by the morning of August 10th (A Block's final round).

As we now know, Naito didn't win B Block, so the gambles had no chance of paying of.

You can view, in the table below, all of the price changes I recorded before and during the tournament. 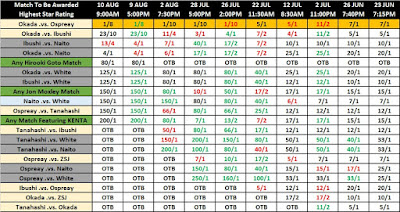 The selections in the peach/pink colour were bouts from A Block, those in grey were ones that could have only happened in a final,  the green covered any block and potential final matches from the named person and the blue was for any B Block matches. In this case, it was for the B Block finale between Naito and Jay White.

The rating that Ospreay and Okada received for their match meant that the 'Exact Star Rating of the Highest Rated Match' market was settled with the 'Exactly 5.75 Stars' option.

As you can see below, it started off at 2/1 but was then slashed into 1/14 shortly after Meltzer's review of the match was published.

The selection did move up slightly. Just like with the market I wrote about above, the eventual winner was moved up on the Friday before the final weekend of shows. In this case, the selection went from 1/14 to 1/10.

As you can see in the table, there appears to have been some punters gambling on Meltzer rating one of the later matches in the tournament more than he did for Okada .vs. Ospreay as the 'Exactly 6.0 Stars' began to descend as soon as the 5.75 was awarded to the night seven match.

I still have more G1 Climax 29 betting posts to publish. I'm not sure when they'll see the light of day, but they are coming. The next will cover the head-to-head markets that were released.