The oddsmakers from Kambi have published a television ratings prop bet for this week's edition of WWE Monday Night Raw.

In the special, customers have the opportunity to bet whether or not the show will have 2.3 Million viewers or more on the USA Network. 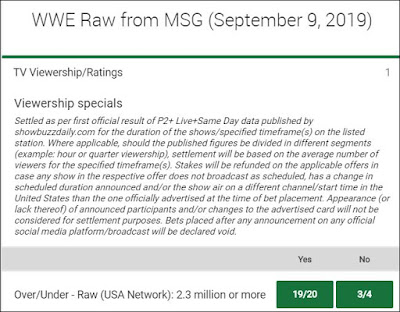 The show will take place from Madison Square Garden and will consist of a number of already advertised matches like the semi final of the King of the Ring tournament, a ladies tag team match featuring all four of pro wrestling's horsewomen, Rey Mysterio .vs. Gran Metalik.

'Stone Cold' Steve Austin is also booked for the show as he'll conduct the contract signing for the Seth Rollins .vs. Braun Strowman Universal Championship match that's set for Clash of Champions a week from today.

Last week's episode scored an average of 2,507,000 viewers, but there's a very good reason why Kambi has set the bar lower than that number and the 'No' (Under) is a 3/4 favourite.

The majority of Raw will compete against the Houston Texans' visit to New Orleans and Oakland's home meeting with the Denver Broncos will have its opening quarter, possibly more, against the latter portion of Raw.