In this post, I'll run through the variety of markets customers can find.

Prop Bet
The oddsmakers have published one of their titled prop bets this month. It's the one called 'Joint Winners' and asks the customer to wager 'Yes' or 'No' on at least two matches on Sunday's card getting the highest star rating in Dave Meltzer's review. As of 7:00PM BST this evening, the 'No' is a favourite at 7/20. A win for the 'Yes' will pay out at odds of 19/10.

Highest Rated Match Of The Night
Customers can bet on the match that receives the most stars in Meltzer's review of the PPV. 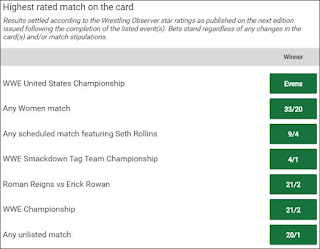 The favourite is the United States Championship match which will see AJ Styles defend his title against Cedric Alexander. It's EVS.

Exact Star Rating Of Highest Rated Match
A market in which clients can wager on the amount of stars the highest rated match receives is also available. 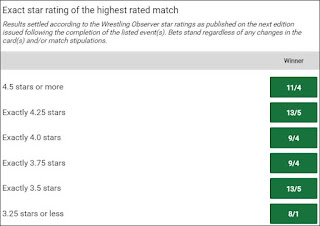 Head-to-Heads
A couple of head-to-head specials have been published. In these bets, two matches are usually put up against one another and the winning selection is the bout which receives the highest amount of stars of the two. A third option is available in both head-to-heads which will pay out if both matches receives the 'Same Star Rating'.

In the first market, Styles .vs. Alexander - for the 'WWE United States Championship' - is up against 'Any Scheduled Match Featuring Seth Rollins'. This obviously means the Raw Tag and Universal Championship contests.

As of this evening, Styles .vs. Alexander is a 4/6 fave. A win for either (or both) of Rollins' matches will pay out at 7/5. If the Styles/Alexander rating is identical to Rollins' best rating for the night, the 'Same Star Rating' option will win at 43/20. 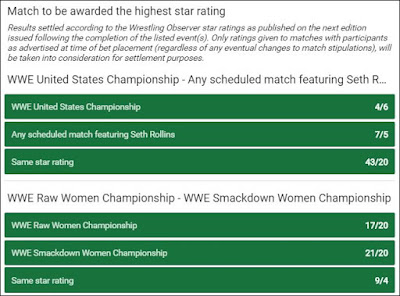 The second head-to-head will have the four horsewomen competing against each other with Becky Lynch .vs. Sasha Banks, for the Raw Women's Championship, at 17/20 over the WWE Smackdown Women's Championship contest between Bayley and Charlotte Flair at 21/20.

Should both of the women's title matches receive the same amount of stars in next week's Wrestling Observer Newsletter, the winning 'Same Star Rating' selection will pay out at odds of 9/4.

Over/Unders
The most popular Wrestling Observer star ratings markets for wrestling PPVs are the Over/Under markets where customers can guess whether Meltzer will end up rating a match above, below or exactly on the line that Kambi has published.

All of the matches, along with their lines, can be found in the table below. 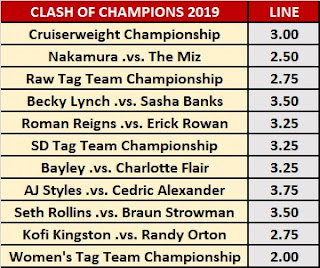 I have placed a couple of bets on the O/U markets.

As I usually do, I predicted what the Kambi oddsmaker's lines would be and then looked to see if there was anything that stood out. I usually like to have a bet when there's a half a star difference between my predicted line and theirs.

For this month, the match that stood out the most is the WWE Raw Tag Team Championship contest. I guessed Kambi would have had it at 3.25, so - seeing as it ended up at 2.75 - I thought I'd have a gamble on the 'Over'.

I also guessed Shinsuke Nakamura .vs. The Miz was going to have a line of three stars, so I thought I'd place a wager on the 'Over' for that one as well.

Of the two, I am more confident in the tag match, though.

We'll see how I fare when next week's issue of the Wrestling Observer is published in a week's time.