On Saturday, the oddsmakers from Kambi released a couple of specials markets for NJPW Wrestle Kingdom 14.

Unlike previous years, the 2020 edition of the show will take place over two nights - the annual January 4th date and the following night. Both events will take place at the Tokyo Dome.

Even though there has been no confirmation yet, there have been hints - made by Tetsuya Naito and Kota Ibushi - that January 5th's main event could be a battle between the IWGP Heavyweight and Intercontinental Champions with the winner taking both straps.

With the possibility that a title .vs. title match is the plan for January, the Kambi oddsmakers have created specials where clients can wager on who is holding the IWGP Heavyweight Championship at the conclusion of 'Day 2' and what the 'Exact Composition' of match opponents is.

Barring a loss of the title shot briefcase he won by winning this year's G1 Climax over the coming months, Kota Ibushi will challenge for the IWGP Heavyweight Championship on January 4th.

If the title .vs. title idea reaches fruition, then the winner of the IWGP Heavyweight Championship match on January 4th will then go on to face whoever the Intercontinental Champion is on the 5th.

As of this moment, it looks like Kazuchika Okada .vs. Kota Ibushi will be the IWGP Heavyweight Championship contest on Janaury 4th and, unless he loses it before then, the Intercontinental Champion - Tetsuya Naito - will then meet the winner in the title .vs. title match the following night.

It is also likely that Naito will defend his strap on January 4th just so they have more intrigue for the title versus title match.

From a betting perspective, Ibushi opened as an even money favourite to leave night two as the IWGP Heavyweight Champion.

The person who has talked about being a double champion for quite some time (ie before Ibushi) - Naito - was a 7/4 second-favourite.

They were both followed by the current titleholder at 2/1. 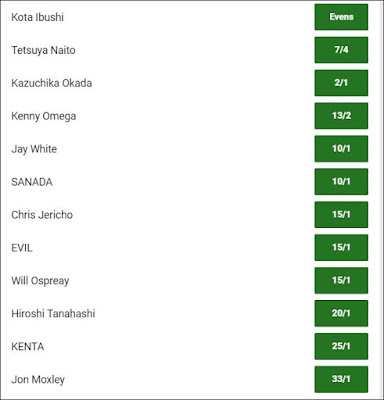 As noted, the two wrestlers who have voiced a wish to be a double champion have been Ibushi and Naito, so it was unsurprising to me to see 'Kota Ibushi .vs. Tetsuya Naito' as the favourite in Kambi's 'Exact Composition of Match' market in which customers have to wager on the match they believe will be contested for the IWGP Heavyweight Championship on night two.

The joint-second favourite is Okada .vs. Ibushi, which is the scheduled match for January 4th. Therefore, I believe it should have slightly higher odds than the 5/2 on offer.

The other match in second is one that would see - if the title .vs. title route happens - Kazuchika Okada successfully defend the IWGP Heavyweight Championship against Kota Ibushi on January 4th and then meet Tetsuya Naito the following evening. 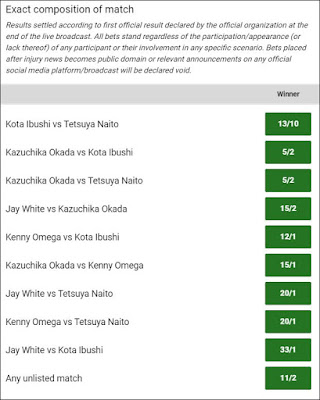 This post was written on Sunday afternoon. I decided to wait until Clash of Champions was out of the way before I published it. I focused on the opening odds for both markets. The current prices might have changed by now. If they have, I'll post another update within the next few days.