Marc Raimondi - from ESPN.com - has reported that the New World Order will be inducted into WWE's Hall of Fame next year. 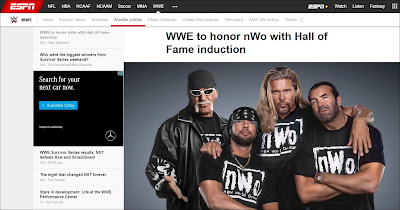 The article states that the group will consist of Hulk Hogan, Kevin Nash, Scott Hall and Sean Waltman (Syxx).

Now that this news is out, a betting market - that was still available when I began writing this post - has been closed.

In the special, customers had the opportunity to gamble on who they believed would be the headliners of 2020's ceremony, which will take place on April 2nd.

Update: Shortly after publishing this post, WWE sent out a press release to announce that Batista is also set to be in the class of 2020.
Posted by David Taylor at 14:45