The first week of the relaunched XFL American football league will begin tomorrow when the Seattle Dragons take on the DC Defenders.

As this is the league owned by Vince McMahon's Alpha Entertainment, and with the blog being about pro wrestling betting, I'm going to take full advantage of this link by writing a weekly blog post in which I look at the upcoming games, make notes about the outright winner markets and more.

With this being the first week, I thought I'd share with you the two teams I have backed to be crowned 2020 champions.

I have gone for the aforementioned DC Defenders and have also backed the Houston Roughnecks.

With the bits of research I was able to do, I graded the teams and have DC topping the Eastern Conference and then, in the Western Conference, I have Houston and the Dallas Renegades tied. Seeing as there is more value in Houston - from the odds - I settled with an upset of sorts with Houston beating the bookies' favourites to make it to the championship game.

The reason why I am high on DC is because the team has Cardale Jones as a quarterback. A lot of the insiders I follow have pointed him out as the best QB in the league. Further to that point, DC's head coach is somebody I am aware of.

Pep Hamilton is regarded as a 'Quarterback Whisperer' due to his time working at Stanford back during Andrew Luck's time at the college. Hamilton found his way working with Luck once again when he was brought to the Indianapolis Colts to work as offensive co-ordinator in what I believe was Luck's second season in Indy.

The table below compares BetOnline's odds to win the league from November 21st to this morning. 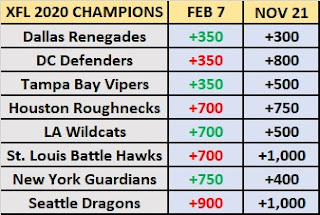 Over here, in Europe, the bookmakers have better odds for the two teams I've highlighted. For example, William Hill lists DC at 8/1 in its book while - at sites like Betfred - you can find Houston around 10/1 or 11/1.

During the college and NFL football seasons, I like to have a few bets on games. I use a spreadsheet to help make my picks. However, there is a big problem with being able to do that with the XFL and it's because there are no PAT kicks. Instead, the teams get the choice of running a play to snare an extra 1,2 or 3 points.

The more points the team wants after its touchdown, the more it would need to work for it.

A one-point attempt will start at the two yard line, a two-pointer from the five yard line and a three point conversion will require the team to move the ball into the end zone from a ten yard play.

I'm intrigued to see how this rule will affect the games. I surmise the line makers are as well as that would explain why, for the first week at least, that no bookmaking firm - as far as I can see! - have released total points over/under lines for this weekend.

Despite not fully being confident that the spreadsheets can work for these games, and if I am able to get the stats that I can for my College/NFL football, I might give it a go and share the results in these weekly posts.

However, I want to clarify that I don't bet on ALL of my spreadsheet's results. And - to be honest - it let me down this past Sunday as it had the 49ers to win the Super Bowl straight up.

With that said, it projected that there would be fifty-two points in total and the actual amount was fifty-one so it correctly called the 'Under' for the game.

Back to the XFL. This week's current pointspread lines - from BetOnline are:

The lines are quite similar over here in Europe give or take half a point.

Until I know exactly how these games are going to fare, I think I'm going to place a small bet on the team that has been given the most points this week and that's St. Louis.

I guess the only positive I can say about the BattleHawks - other than the fact they have the most points of the four underdogs - is they are the visiting team that will have the shortest travel time.

William Hill has the team at +10, so that'll be where I'll place the bet.

Like I stated above, it's even more of a gamble than usual.
Posted by David Taylor at 16:46