Taichi's odds to be the 2020 winner of the New Japan Cup have once again lowered in an outright market that's available for the tournament from the Kambi oddsmakers. 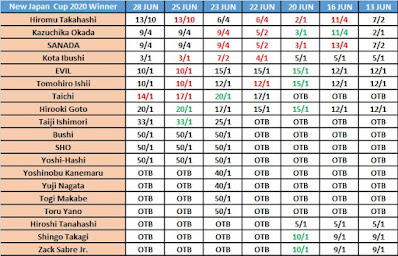 Taichi is set to square off against the 2019 G1 Climax winner, Kota Ibushi, on Wednesday after beating Hiroshi Tanahashi in the first round.

For what it's worth, Kambi lists Ibushi as a 7/20 fave to win that meeting. Those looking to gamble on Taichi building on his round one upset against Tanahashi can get 19/10 to end Ibushi's tourney.
Posted by David Taylor at 12:26