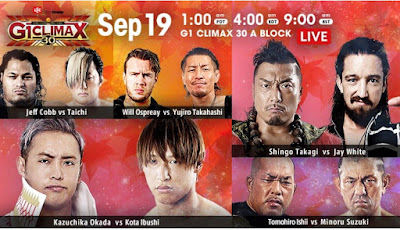 The opening night of this year's G1 Climax has begun and - barring knocks at the door, a dodgy Internet connection and/or telephone calls interrupting this plan - I will try to post live updates in regards to the odds and match results.

Yuya Eemura has just beaten Yota Tsuji in the opening match between two young lions. The tournament will now get underway with Will Ospreay .vs. Yujiro Takahashi.

Will Ospreay .vs. Yujiro Takahashi
When the market for this match was first published, Ospreay was a 1/5 favourite. A win for Takahashi was priced at 3/1.

The prices remained at these levels for most of the week, but were adjusted yesterday with Ospreay dropping into 1/8 while his opponent was moved up to 4/1.

Ospreay won with the Stormbreaker.
Jeff Cobb .vs. Taichi
Next up is Jeff Cobb versus Taichi with the betting favouring the former who initially started as an even-money underdog.
Cobb was down to 13/20 yesterday evening after spending a couple of days at 4/5.

Taichi started out at 7/10, but went out to 9/10 on Wednesday after Cobb's price was lowered. He was then up to 11/10 when I checked in last night.
The match ended with the closing underdog winning. This was the first match market I had a bet on.. and I lost!
Next up is the bout I've been looking forward to the most out from tonight's card.

Tomohiro Ishii .vs. Minoru Suzuki
When the market for Ishii .vs. Suzuki was published, the bookmakers had the latter at 11/10 and Ishii at 13/20.

By last night, the odds for a Suzuki win had lowered slightly into 19/20. Ishii closed as a 3/4 favourite.

Suzuki won. So, even though he closed as an outsider, the betting did point to at least some interest in him getting the W.
I enjoyed that match. It was hard hitting stuff, just as you'd expect from those two. Penultimate match of the night is soon about to start.

Shingo Takagi .vs. Jay White
Jay White was a 4/6 favourite to beat Shingo Takagi (27/25) when a market for their match was first published.

The market remained stationary until yesterday when White was lowered into 1/2 and his opponent was pushed to 7/5.

White started off slow in 2019 before a late surge took him to the final.

Those that may have gambled on White would have won their wagers as he got the two points.
Kazuchika Okada .vs. Kota Ibushi

As you can see above, when the market for the Kazuchika Okada .vs. Kota Ibushi night one main event was published, the oddsmakers had both men at 17/20.
By last night, the betting moved Okada to 4/5 favourite. A win for Ibushi will now pay out at 9/10.
I cannot shake off the feeling that this will go to a time limit draw. We'll see...
My instinct was off yet again. Ibushi got the win.
I might be back with more live blogs during the tournament. Unsure if I'll do one tomorrow as it's a 6AM BST start.
Posted by David Taylor at 09:20