It's the final round of A Block tournament matches today. As per usual, I'm going to run through all of the betting odds for the matches and point out how the betting went. 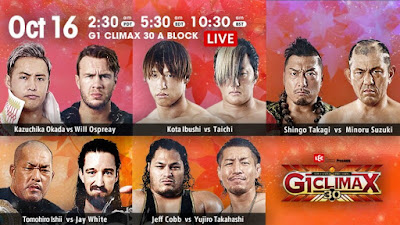 Jeff Cobb (4-4) .vs. Yujiro Takahashi (0-8)
The market for today's opening tournament match was first released on October 12th. It started off with Jeff Cobb a 7/20 favourite. His opponent - Yujiro Takahashi - was 19/10.
By 7:00PM BST last night, Cobb's price had lowered into 5/4 and was then at 11/10 this morning before the market closed.

Yujiro Takahashi closed as a 13/20 underdog.

Match Winner: Yujiro Takahashi
Shingo Takagi (3-5) .vs. Minoru Suzuki (3-5)
It didn't take long for Shingo Takagi's odds to lower in the market for his match against Minoru Suzuki.
On Monday morning, Takagi was a 3/5 fave. However, by 7:15PM BST that evening, the price was down into 13/25.
The favourite was down to 1/3 when the market was republished yesterday evening and remained at this number right through to this morning's close.
Suzuki went from 6/5 to 13/10 and then to 2/1 in this period.

Match Winner: Shingo Takagi
Kazuchika Okada (6-2) .vs. Will Ospreay (5-3)
The market for Kazuchika Okada .vs. Will Ospreay was first published last month with both men at 17/20 each.
By September 27th, Ospreay's price was down to 4/5 and Okada's was at 9/10. However, on October 2nd, the pair flipped with Okada moving into 4/5 favourite.
Ten days later, the bookmakers had Okada a 3/4 fave. When the market was republished last night, Okada's odds were down to 13/20 and were then at 11/20 when I visited this morning.

As you can see above, with Okada moving in during the latter stages of betting, Ospreay ended up closing as a 5/4 underdog.
Match Winner: Will Ospreay
Kota Ibushi (6-2) .vs. Taichi (4-4)
Kota Ibushi was a 1/2 favourite when the market for his final tournament match was released a few days ago. His opponent for today - Taichi - was 7/5.
The following day, Taichi's odds were down into 27/25 with Ibushi - whilst still a favourite - moving up to 4/6.
When the market was put back online last night, I noticed that Taichi was a 4/9 favourite. over the 6/4 for his opponent. However, by this morning, the latter had moved into EVS. 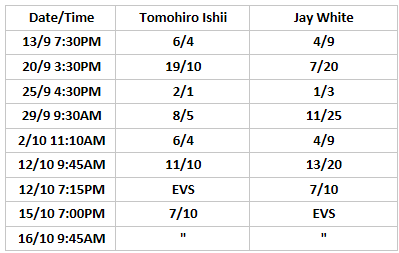