Kambi has released markets for the latest match to be confirmed for tomorrrow night's WWE Elimination Chamber PPV. 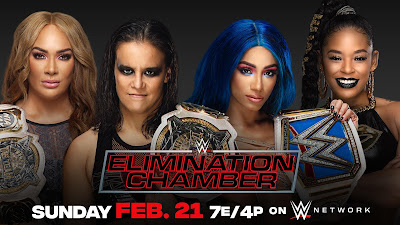 As of the time of writing, the champions are 13/20 favourites. A decision in favour of Banks and Belair will pay out at odds of 11/10.
The bookmakers have also published a Wrestling Observer star ratings market for the contest with the line set at three stars.
Following last night's Smackdown, the market for the men's Elimination Chamber match - to determine Roman Reigns' challenger - has been adjusted. 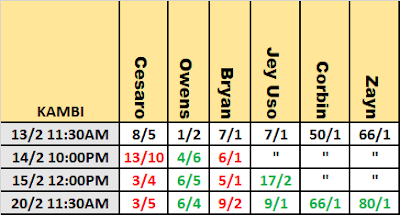 Cesaro and Daniel Bryan - who were on the winning team, alongside Kevin Owens, against the other three participants in Sunday's match - have both had their prices shortened.
The Swiss Cyborg, who had been a 3/4 favourite since earlier this week, is now into 3/5 while Bryan, whose odds fell from 7/1 into 5/1 between last Saturday and Sunday, is now being offered at 9/2.
Initial favourite, Owens, is now up to 6/4. He was most recently at 6/5.
The other selections have also drifted out with Jey Uso now at 9s from 17/2, King Corbin moving out from 50/1 to 66/1 and Sami Zayn jumping out to 80/1 from 66/1.
Sunday's winner will go on to challenge Roman Reigns for the Universal Championship following the chamber match.
A market for the contest has been available since last weekend. As you'll see below, the price for a decision in favour of Roman Reigns is now priced at 1/20. This is down from 1/16.

The challenger, whoever they may be, is now 7/1 from 6s.
Kambi's market for the WWE Championship match has also been changed since I last visited it yesterday evening.