Sky Bet has published a market for the WWE Women's Tag Team Championship match that is set for tomorrow's PPV.

As of the time of writing, the titleholders - Shayna Baszler and Nia Jax - are 4/7 favourites. A decision for Sasha Banks and Bianca Belair will pay out at odds of 5/4.

The market for the Elimination Chamber match to determine Roman Reigns' Universal Championship challenger has been republished this evening.

As you'll see below, the bookmakers have once again shortened Daniel Bryan's odds to outlast everyone and become the number one contender. He is now at 9/2. This is down from the 11/2 Bryan was moved to when the market was previously available. 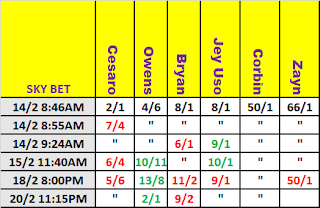 With Daniel Bryan moving in, Kevin Owens - who had started out as the favourite - has continued to drift out. He is now up to 2/1. He was most recently 13/8.

Another market that has been republished tonight is the one for the Universal Championship match.

Roman Reigns is still a favourite. However, his odds have moved up to 1/9 from 1/16 due to the 'Winner of Number 1 Contender Match' selection dipping from 7/1 into 5/1.