Sky Bet has published specials markets for the two chamber matches that are scheduled for this Sunday's WWE Elimination Chamber PPV.

Before I take a look over what is available, I'll point out the adjustments that have been made to both of the outright winner markets since I last wrote about them.

In the WWE Championship market, the odds for a Drew McIntyre win have continued to slide. As you'll see, the champ was down to 2/5 - from 1/2 - by 10:00AM GMT this morning.

With McIntyre moving in, second-favourite - Sheamus - has been moved up slightly as he's now at 9/4 from 2/1. 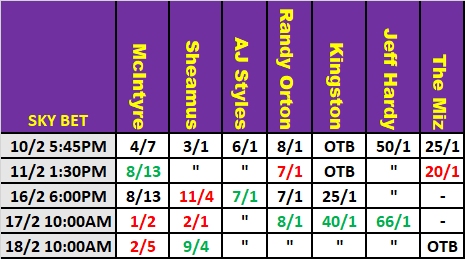 The market for the match to determine Roman Reigns' Universal Championship challenger was changed sometime between 10AM and 8PM GMT today.
As you can see - in the table below - Kevin Owens, who was a 10/11 favourite for the past few days, has now been pushed to 13/8. In his place is Cesaro, who is now the odds-on favourite. 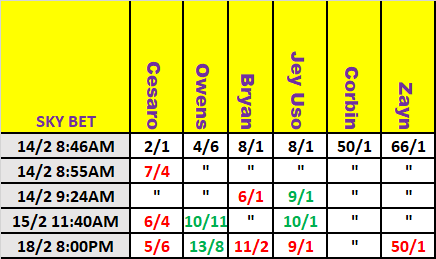 Cesaro's selection isn't the only one to have shorter odds than the start of the day.
Daniel Bryan, who has been 6/1 since Sunday, is now at 11/2. Jey Uso is back to 9/1 after moving up to 10/1 by Monday morning and Sami Zayn - who has been 66/1 since the start - is now at 50s.
The three special markets are: First Entrant Eliminated, Iron Man and Most Eliminations.
Jeff Hardy and Sami Zayn are favourites to leave their respective matches first, while the two match winner favourites - McIntyre and Cesaro - are fancied to get the most eliminations in their contests.
The 'Iron Man' offering is only available for the WWE Championship match as of the time of writing. Its favourite is the titleholder.
Here are the complete markets along with the prices as of 8:00PM GMT this evening.
WWE Championship - First Entrant Eliminated
Jeff Hardy 4/7
Kofi Kingston 9/4
Randy Orton 3/1
AJ Styles 8/1
Sheamus 14/1
Drew McIntyre 20/1
#1 Contender For Universal Title - First Entrant Eliminated
Sami Zayn 4/6
King Corbin 7/4
Daniel Bryan 9/2
Jey Uso 6/1
Cesaro 16/1
Kevin Owens 16/1
WWE Championship - Most Eliminations
Drew McIntyre 1/2
Sheamus 5/2
AJ Styles 5/1
Randy Orton 5/1
Kofi Kingston 33/1
Jeff Hardy 50/1
#1 Contender For Universal Title - Most Eliminations
Cesaro EVS
Kevin Owens 2/1
King Corbin 5/1
Daniel Bryan 5/1
Jey Uso 10/1
Sami Zayn 33/1
WWE Championship - Iron Man
Drew McIntyre 4/6
AJ Styles 5/4
Randy Orton 6/1
Kofi Kingston 8/1
Jeff Hardy 20/1
Sheamus 20/1
Posted by David Taylor at 20:54