Nikki A.S.H's MITB Cash-In And The Bets It Will Settle

Nikki A.S.H's successful Money in the Bank contract cash-in, on the most recent edition of WWE Monday Night Raw, means that a few betting specials - that Kambi priced up over the weekend - will now end up being graded. 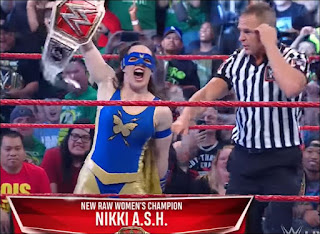 First - the proposition market which asked whether the cash-in would end up being successful or not will be settled as a win for 'Yes'.

The winning selection was a 7/25 favourite when it was first installed on Saturday and remained at that price right through to the close of betting ahead of Sunday's PPV.

With the cash-in taking place on an episode of WWE Monday Night Raw, the market which allowed customers to gamble on the 'Show of briefcase cash-in' will have 'Weekly TV Show' as the winning pick.

As you can see, in the table above, the option was a 5/2 underdog to the 1/4 that would have paid out had the contract had been executed during a WWE Pay-Per-View or NXT TakeOver event.
The timeframe market, in which customers bet on three potential periods when the cash-in could have taken place, will be graded with 'Before end of SummerSlam' as the winner.

The selection which won had started out as an 8/5 second favourite behind the 3/5 price which covered the months post-SummerSlam right through to the end of this year.
Customers appear to have punted on the correct result because, by the morning of the PPV, the selection had lowered into 7/5 while the favourite rose to 13/20 from 3/5.

There was a proposition market which asked whether the men's Money in the Bank contract would be cashed in before the women's.

This will obviously be settled with 'No' as the winning pick. It was a 7/10 favourite over 'Yes', which was EVS.

Another market asked whether both the men's and women's cash-in's would end up being successful.

'Yes' was a 2/5 favourite and is now relying on Mr Money in the Bank 2021 (I did type 'Big E', but thought I had better not jinx him after what happened last year with Otis) to do the honours. Otherwise 'No' will be the winner at 7/4.

On the topic of Mr. Money in the Bank, Kambi also published similar markets for the men's cash-in. Here are all of the prices that were available when they first went live over the weekend.

I'll continue to follow the men's Money in the Bank cash-in specials should they be republished over the coming weeks and months.
The markets were courtesy of Kambi
Posted by David Taylor at 14:41