I have just spent part of the morning looking through all of the Money in the Bank ladder match markets from a handful of the sports betting websites I have been following the price movements on. In this post, I'll share with you all I have found right up to the time of posting.

What I usually do, in these Sunday morning posts, is go match by match, but - for this month's PPV - I'll cover it by sportsbook to sportsbook because there are some similarities - and a few contrasts! - between who is being backed and where.

Paddy Power
Considering that the two Money in the Bank ladder match markets are outrights, I have been covering Paddy Power's coverage of the PPV. If you'd like to see why Paddy Power / Betfair is not recommended for regular WWE match betting, you can view the reason IN THIS POST.

In the men's market, the odds for a Big E victory have been declining since Friday morning, but especially since he was the fall guy in the fatal four-way at the close of Friday night's edition of Smackdown. 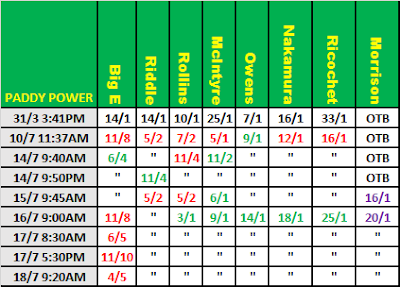 Another note is in regards to John Morrison's odds. The selection is unavailable on the Paddy Power website, but can be found at 20s on Betfair (the same market is synched across both sites). 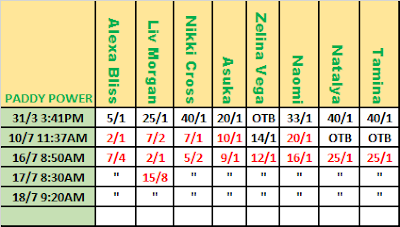 The market for the women's match is still showing the same pricing as yesterday morning after Liv Morgan's odds moved in from 2/1 into 15/8.
Alexa Bliss is the favourite albeit slightly over Morgan.
Sky Bet
Sky Bet added some names to its markets yesterday.
In the men's, Goldberg was put in at 10/1. However, by late-evening the bookmakers increased the price to 16/1 and have since put it up to 20s.
On one hand, it's understandable to see Goldberg being requested. There are reports that Goldberg might be Bobby Lashley's opponent for SummerSlam. Therefore, it's safe to guess that the request came in from someone who is aware of that news and would like to have a punt on Goldberg securing the title shot by winning the Money in the Bank match.
I highly doubt Goldberg will be in the match tonight as those same reports indicate he'll make his return to Raw tomorrow night. 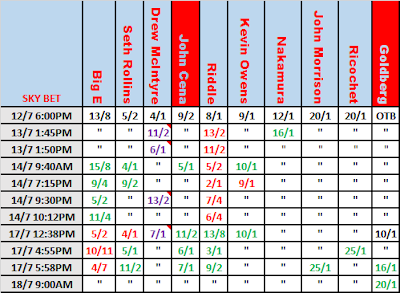 As for the wrestlers who are confirmed for the match, Big E is once again the name to watch because his price has been moving in since yesterday - which coincides with his loss on Friday night.
Those checking in for the first time should also note Riddle's price. Earlier in the week, the sportsbook appeared to have received a number of wagers on the former MMA fighter. At one point, he was a 6/4 favourite.
Sonya Deville and Becky Lynch were both added to the market yesterday. Lynch was 6/1, but has since moved up to 10/1 while Deville was 10/1 and was backed into 8/1 within an hour of me keeping track of her pricing. 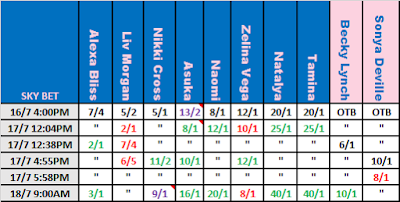 Liv Morgan is a 6/5 favourite to win. However, the selection which has moved in overnight is the one for a Zelina Vega victory. It went from 12/1 into 8/1.

Nikki Cross - who is 8/1 in the regular market - can be found at 9/1 in a price boost. That is why her odds are coloured in purple.

Kambi
Kambi's markets were republished yesterday. They were first installed earlier this year. The refreshed list consists of only the names that have been advertised for tonight. Their earliest odds can be viewed along with the current prices below: 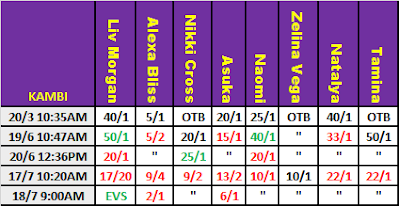 Liv Morgan remains a favourite after she was 17/20 on yesterday's reopening. However, she is now up to EVS.

5Dimes
When I wrote about 5Dimes' market - for the women's match - yesterday, I pointed out that Liv Morgan's odds had dropped into favouritism following Smackdown.

Big E moving in from +205 into +177, following Smackdown, was also pointed out in yesterday's post. His selection's decline continued by the early evening with a drop into +120. 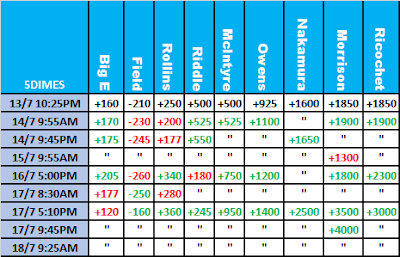 The market remains unchanged since late last night when the bookmakers pushed John Morrison out to +4,000 from +3,500.

BetOnline
Even though 5Dimes has moved her odds up, Liv Morgan has been on the decline in BetOnline's market for the women's MITB ladder match.

As you'll be able to see, in the table above, Morgan was +350 when the market launched in the early hours of yesterday morning. By the evening, the company had dropped the selection into +250 and was then compelled to take it into +200 by the evening.

When I checked in this morning, Morgan was +175.

Alexa Bliss has remained a favourite, despite the apparent interest in Liv Morgan winning. However, Bliss has drifted out from +125 to +135 following Morgan's overnight drop.

Even though his odds have recently been coming in everywhere else, the last time Big E's price was reduced in BetOnline's market for the men's match was when the selection descended from +450 into +175 on Tuesday. 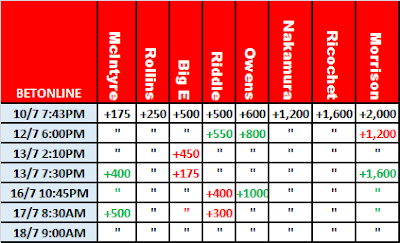