The 5Dimes Sportsbook published its WWE Royal Rumble betting markets last night, but - before I write about them - I feel I should address something very important on so many levels.

On September 24th, 5Dimes' owner - William Sean Creighton - who is best known in the gambling industry as 'Tony' was kidnapped in Costa Rica, where the sportsbook is based.

There have been many stories written about this situation. Some contradict others, but I'll go with what has been reported by a couple of US news services this week.

On the 24th of September of last year, Creighton was allegedly pulled over by police. Authorities claim that the two officers who had stopped Creighton were working with four other individuals who forced him into a truck and drove off with him.

ABC News reports that the kidnappers then staged an accident to make it look like Creighton had crashed his car. They went on to contact his family demanding a ransom for their captive's release.

Walter Espinoza, who is the director of the force in charge of investigating the case, stated - in a press conference - that the kidnappers initially asked for $5,000,000 to be paid in Bitcoin. This figure was eventually lowered to $1,000,000 and the family are alleged to have paid this.

After payment, the family claim they didn't hear from Creighton or the kidnappers again.

A week ago, three members of one family who authorities believe are involved in the kidnapping, were arrested in Spain.

Nine others - who are thought to be part of the operation  - were taken into custody in Costa Rica.

One of the people detained in Spain has been referred to by the media as the 'Mastermind' behind the crime.

All of the arrests took place within the past week. 5Dimes, as far as I am aware, has not made an official statement since making one on October 17th that read: 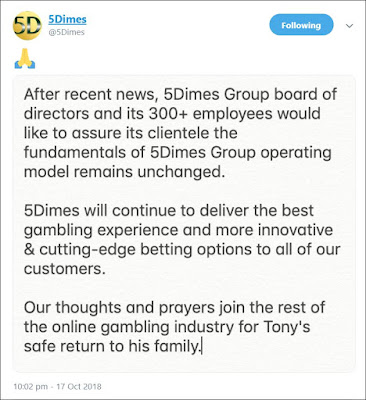 As of the time of writing, 'Tony' is still missing.

I am fully aware that he is a controversial figure in some circles, but I respect how he built up that book for twenty-plus years and was ahead of the game when it came to offering WWE betting opportunities on a regular basis. Other firms would not have followed suit had it not been for Tony and his staff. Other companies have expanded on the coverage, but it might not have happened had it not been for 5Dimes regularly putting up lines.

As an affiliate of 5Dimes, I felt that this situation needed to be addressed if I am to write about the sportsbook's WWE lines from later on today and the foreseeable future.

September 20th 2019 Update: There have been reports that Tony's body has been found. Please read THIS POST for more information.
Posted by David Taylor at 11:43