Kambi's oddsmakers have published Wrestling Observer star ratings proposition and specials markets for this coming Friday's WWE Super ShowDown PPV. In this post, I'll run through what they have and point out the earliest prices.

Prop Bets
There are currently three prop markets available for the show. As per usual, they have their own title so I'll explain what they mean for those who may be coming across them for the first time.

Joint Winners
In this market, customers can bet whether or not two or more matches receive the highest amount of stars in Dave Meltzer's review of the PPV. The bookies have put 'Yes' at 19/10 and the 'No' is 7/20.

Main Event
The proposition market titled 'Main Event' allows the punter to bet on the highest rated match to have been the final match on Friday's card. Those looking to bet against this can find the 'No' at 1/12 while the 'Yes' is 5/1.

Title Match
Customers have the opportunity to wager on whether or not a title match is given the most stars in Meltzer's Super ShowDown review. They have the 'Yes' at 1/16 and the 'No' is 6/1.


Head-to-Head
There is a market in which customers can bet on which of two matches receives the most stars in the Super ShowDown review.

Reigns/McMahon .vs. Strowman/Lashley
The two matches that are in competition for this week's PPV are Roman Reigns .vs. Shane McMahon and Braun Strowman .vs. Bobby Lashley.
Punters who believe that the former will get the most stars can find the selection at 23/20, those who reckon Strowman and Lashley can do better will find their bout at 3/4 while those who would like to take a gamble on both matches receiving the same amount of stars can back 'Same Star Rating' at 23/10.
For what it's worth, I believe that Reigns/McMahon will do better than Stowman .vs. Lashley and will back this once I have published this post.


Exact Star Rating Of Highest Rated Match
A market is available in which customers can place wagers on the 'Exact star rating of the highest rated match' in Meltzer's review.
As you can see below, they have joint-favourites with 'Exactly 3.5 Stars' and 'Exactly 3.75' each available at 2/1. 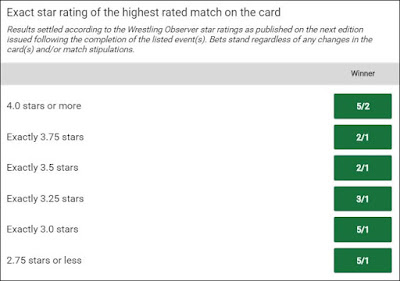 Highest Rated Match
There is also an opportunity to wager on the bout that gets the most stars in the review. The WWE Intercontinental Championship, which will have Demon Balor defend his WWE Intercontinental Championship against Andrade is a 3/4 favourite. It's followed by other matches that have been confirmed for the show. Any match that is not given its own price will fall into the 7/1 for 'Any Unlisted Match'. 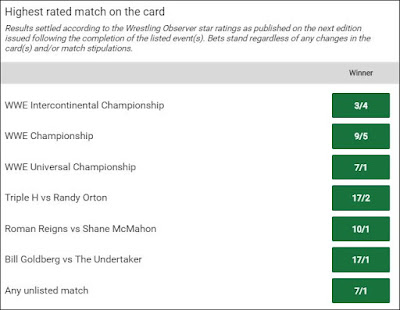