Mysterio And Styles Lowered In US Championship Market

The news that Rey Mysterio is returning to WWE on tomorrow night's episode of Monday Night Raw might have played a factor in a change in one of Sky Bet's 'Champion After' markets.

The special, in which customers can place bets on who will succeed Ricochet as WWE United States Champion, has been adjusted since yesterday's news came out. Mysterio, who had to relinquish the title a few weeks ago through injury, has been taken down from 10/1 into 9/1.

The favourite - AJ Styles, who is feuding with Ricochet - is also showing a shorter price than he was recently. He's now at 10/11. This is a dip from 5/4.

As a result of Styles and Mysterio's prices being snipped, two other selections have been increased. 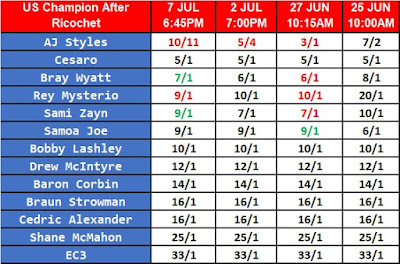