With the King of the Ring tournament beginning on tonight's edition of WWE Monday Night Raw, I thought I'd share with you my tournament bracket.

To be fair - after I completed it, I looked over it and thought to myself that it seems far too obvious considering who I have in the final. 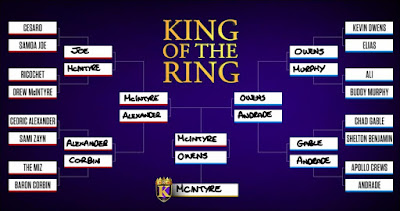 As soon as the tournament was announced, Drew McIntyre became my favourite to win. I've stuck with The Scottish Psycopath even after seeing him draw Ricochet in the first round.
Posted by David Taylor at 23:30

Email ThisBlogThis!Share to TwitterShare to FacebookShare to Pinterest
Labels: WWE King of the Ring Betting