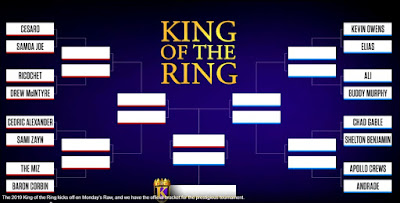 WWE has revealed the brackets for the King of the Ring tournament that begins on TV next week.

On the Raw side, the opening matches will be:

Cedric Alexander .vs. Sami Zayn
The Miz .vs. Baron Corbin

On the other side, with matches that will take place on Smackdown, they have:

The biggest match at this stage has to be Ricochet versus Drew McIntyre only because it's a match containing two names at the top of betting markets.
Posted by David Taylor at 21:17

Email ThisBlogThis!Share to TwitterShare to FacebookShare to Pinterest
Labels: News, WWE King of the Ring Betting