When I checked Kambi's professional wrestling markets yesterday morning, I noticed that the WWE to AEW Exodus special in which customers can place bets on the wrestler/s currently contracted to WWE who will next join AEW was back up.

It's no longer available, so I thought I'd publish a short post pointing out the odds from yesterday as all of the selections had changed. 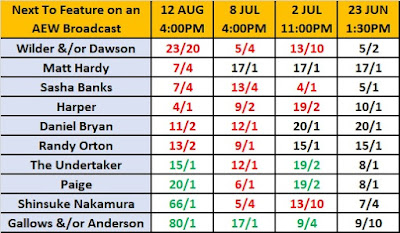 The selection which covers either member of The Revival  departing WWE for AEW was still the favourite. However, its price was down to 23/20 from 5/4.

Matt Hardy was cut from 17/1 into 7/4 joint-second favourite. I surmise this could be because Hardy mentioned - in a recent interview with Sky Sports - that he believes there are three years left on his career.

Sasha Banks is alongside Hardy at 7/4. Her price was previously 13/4 and I'd guess there's a chance she could drift back out now that she has returned to TV.

The biggest leap has been made by the Shinsuke Nakamura selection. It has gone from 5/4 into 66/1.